How to Look for and Photograph Petroglyphs

While I am by no means the expert at either of the things this blog post is about, I know a little more than the average Joe. I provide this knowledge here to those curious, and for my own records. The information provided here is especially relevant to the southeastern United States. If you are from elsewhere you may find that not all the information I provide suits your environment, the types of petroglyphs you have, or your photography needs.

Early along in my caving career it was shared with me that some of the sites we were visiting had prehistoric records in the form of pictographs and petroglyphs. Pictographs are painted onto the wall with a medium, like charcoal, or red ochre. Petroglyphs, or glyphs, are incised marks on stone. The two are different enough to warrant separate articles on how to photograph and image. If you are interested in photographing pictographs, check out this article I wrote on the subject.

I should note that the techniques I provide here for imaging petroglyphs are also effective for discerning text on old grave markers. It is non-destructive, but should probably be done during hours where sunlight won't interfere with your photography.

What is a petroglyph?

A petroglyph is an image created by removing part of a rock surface by incising, picking, carving, or abrading, as a form of rock art. Outside North America, scholars often use terms such as "carving", "engraving", or other descriptions of the technique to refer to such images. Petroglyphs are found worldwide, and are often associated with prehistoric peoples. The word comes from the Greek prefix petro-, from πέτρα petra meaning "stone", and γλύφω glýphō meaning "carve", and was originally coined in French as pétroglyphe.

What I often see in the field are two types of petroglyphs. One is a scratched image or writing, and the other is more deeply incised into the parent rock. 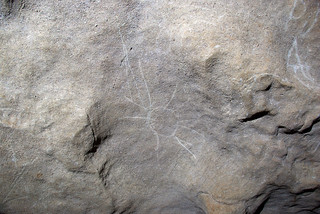 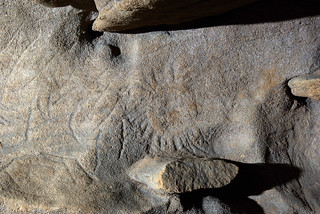 In the above two images, the glyphs are both of the sun, and even found in the same cave. The glyph on the left is a simple scratch, and the one on the right is a more time consuming carving into the rock.

Where does one find petroglyphs?

We tend to find these images along dry, flat surfaces, near the entrance of the cave just inside the dark zone, or within the twilight of the cave.

Dry surfaces are important, but as as necessary for glyphs as they are for pictographs. A pictograph will be weathered away quickly on a moist surface. A glyph may be more prone to weathering if it is on a wet surface. Remember that while a surface may not seem like it is weathering away rapidly, it doesn't have to if it has hundreds or thousands of years to work.

Flat surfaces aren't required, but obviously preferable for the same reason that you and I like to write on flat surfaces. It's easier.

How do I look for petroglyphs? 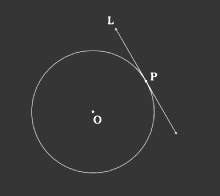 In caves and rock shelters, go to the places described above. Hold a light against the wall and shine it so that its light is tangent to the rock's surface; that is, hold the light so that it side-lights the surface of the rock.

This will accentuate any irregularities in the surface of the rock. Inspect slowly the flat, dry areas near the surface of a cave or rock shelter. Be sure to also be looking for painted surfaces since one finds pictographs in the same places as one finds glyphs.

How do I photograph petroglyphs?

You will want to use light to accentuate these features in the same way as you used a side-light to find them.
Basic technique would be to have your camera stabilized using a tripod, use a remote trigger to fire your camera, and use a synchronized off camera flash to provide illumination. The tripod and remote trigger is of great use later if you want to stack images and blend or mask them together in Photoshop. For your external flash, I would consider photographing the glyphs at least five or six times, if not more than a dozen from different angles, and differing heights in relationship to the glyph. Sometimes the undulating nature of the rock's surface makes it impossible for a single photograph to tell the full story of the glyph, for this it is also useful to mask and blend multiple images. 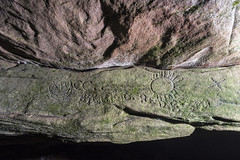 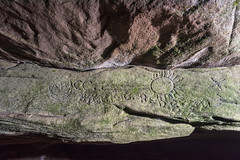 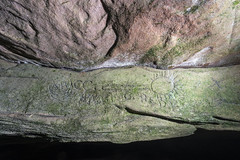 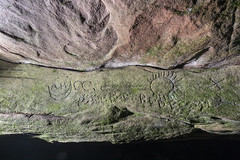 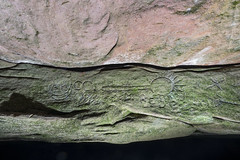 Each of the above images is a single flash and a single exposure. These five images comprise the next three images, which are image stacked and composited using a blending method. Note that the direction and angle of lighting alters between images. This gives us more data to work with if we are to composite these images. 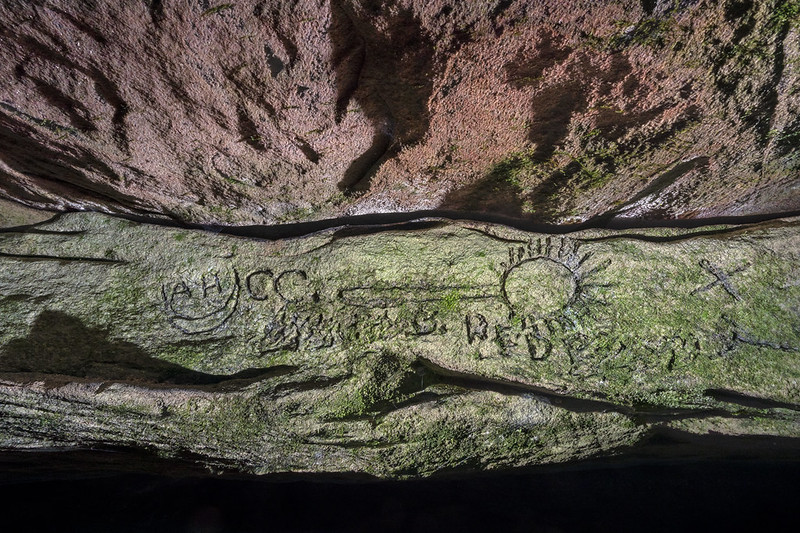 The image above uses the darken image blending mode where it displays the darkest pixel shown from the five stacked images. 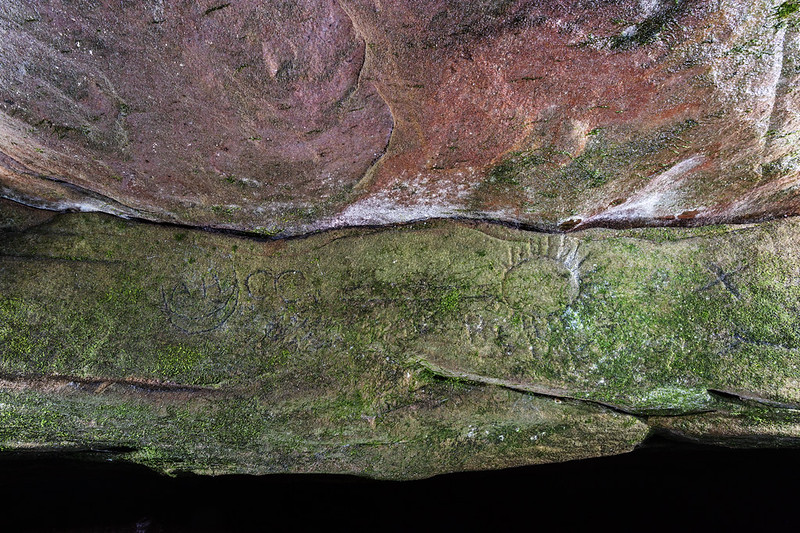 The image above uses the lighten blending most where it displays the lightest pixel shown from the five stacked images. The curves tool was used to lower the middle luminosity values to approximate a "normal" exposure. 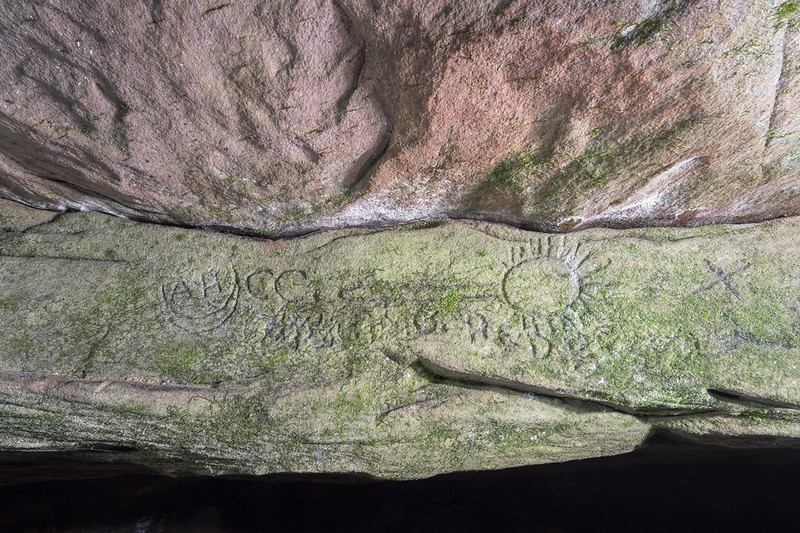 The above image is a transparency blend. Each image was set to 20% transparency and the image was flattened and contrast adjusted.
Each of these three images may be useful for interpretation by themselves, or set aside to create another image stack with masking or blending options. For this glyph, I didn't feel it necessary.

There are plenty of people out there who would happily dig up an archaeology site and collect or sell what they find. Keeping places secret keeps them safe. Please do not dig without the supervision of an archaeologist and follow state guidelines. Especially don't dig on property that isn't yours, including public lands. Illegal digging destroys valuable context to archaeological sites that can never be recovered.
The practice of Leave No Trace ethics in places of archaeological significance is especially important. If you find something that you believe to be important, please contact your state archaeologist.
Posted by Chuck Sutherland at 2/09/2021