Words you'll want to know before you read on:
Contact - The contact between two rock units. This is used interchangeably with geologic contact.
Karst - Refers to a landscape, or landscape features that was created by water dissolving the bedrock. Examples are sinkholes and caves.
Rock Unit - A rock unit is a volume of rock of identifiable origin and relative age range. They are differentiated by a sudden change in rock type, or change in fossils. Many of these will be referred to by their proper Tennessee names (St. Louis limestone, Forte Payne formation, etc...). 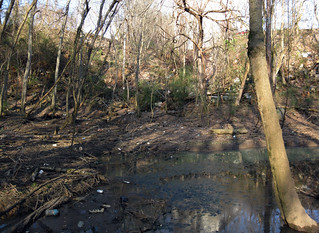 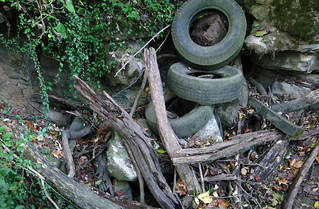 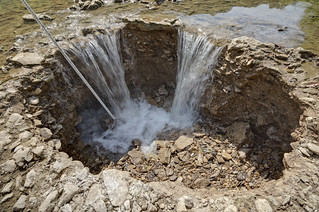 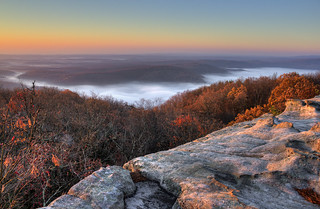 In a general sense, a sinkhole indicates the current or prior presence of a subsurface fluid-filled void (whether water or air or both as is often the case in Tennessee). The Earth is a dynamic place, and stream systems are no exception. Many of our streams run underground in the area of the middle elevations of the Eastern Highland Rim (See St. Louis and Warsaw Limestones here).  Those underground streams affect the land above them and pocket them with cave entrances and sinkholes which capture and transport water. 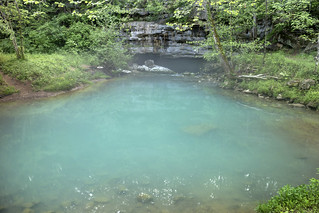 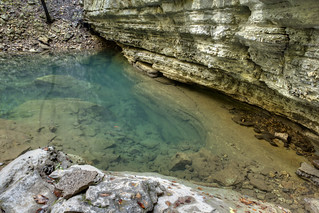 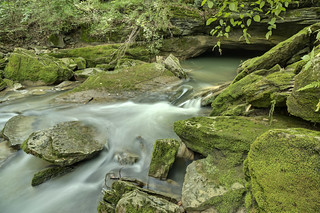 Underground water has to go somewhere. In karst landscapes, large rivers suddenly emerging from the ground are fairly common. Many of these large springs have associated caves. More intriguing are the large springs with no known cave. A caver's fantasy is moving a few rocks, squirming through a hole and being the first human into a large cave system.

Blue holes tend to happen when the resurfacing water is especially deep. The blue, I am told, is due to the large amount of calcium carbonate in solution.

These places have a few names scientists and cavers use, like resurgence, spring, or reappearing stream. 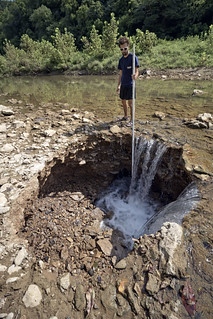 An insurgence is where water disappears into the ground. A swallet is often the lowest place in a sinkhole that also takes water. The words are similar and can often be interchanged.

The two photos above are in the Ordovician aged Leipers Cathys Formation in the Blackburn Fork watersheds of Jackson and Overton County, Tennessee. Both sinks take a considerable amount of water and transport it quickly to its resurgence.

Karst windows are "windows" into a cave. A karst window has an upstream and downstream section (even if the stream is long gone) where passage is visible on both sides. 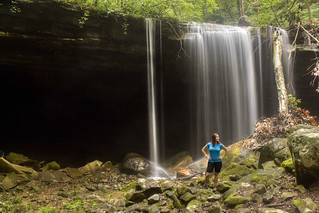 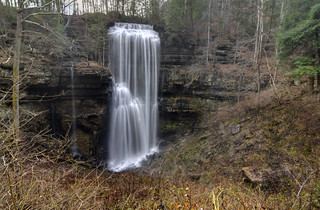 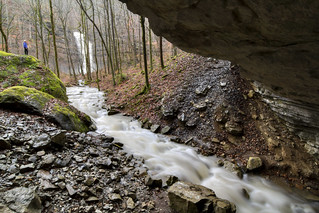 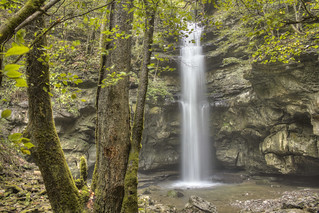 There is a special configuration of karst which is a karst window, but there is an exposed waterfall. This happens in a few places along the Eastern Highland Rim, always at the same geologic contacts of Bangor limestone (representing the upper cave passage), the Hartselle sandstone (the floor of the cave, and the lip of the waterfall), and the Monteagle limestone (the waterfall face and the cave which the water sinks into).

Needless to say, these waterfalls are among the most spectacular things that Tennessee can offer outdoor enthusiasts. Virgin Falls SNA has two features (Virgin Falls, and Sheep Falls) which fit this, and another, Big Laurel Falls which nearly fits this configuration. Just over the ridge, there is Lost Creek Falls, Spring Drop Falls, and Rylander Falls all of which exhibit the same geomorphology to some degree. 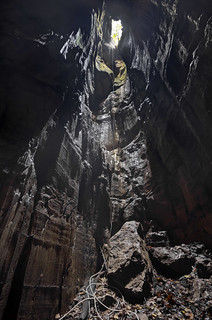 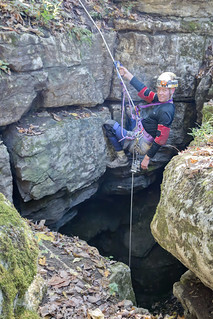 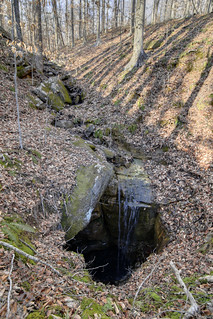 Pits, by definition of the Tennessee Cave Survey are vertical caves that cannot be free climbed safely. Often, they "bell outward" where the entrance is overhung on all sides and as one rappels downwards, the dimensions get larger.

Pits are formed by the same methods of dissolution that create caves, except vertical dissolution will cut the limestone in particular ways. Flutes, domes, and waterfalls are often associated with pits. 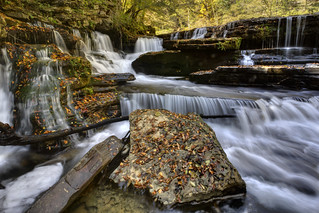 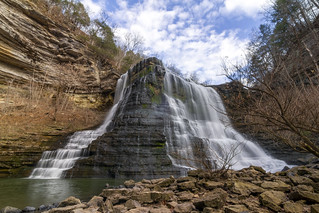 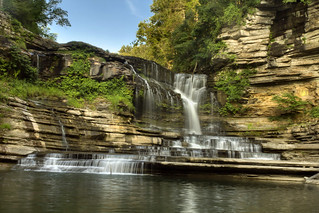 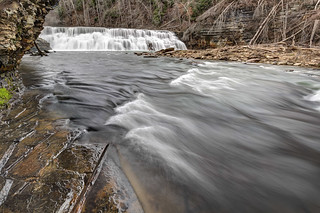 This configuration was so noticeable, I created a computer model using GIS (Geographic Information Systems) to see where waterfalls were that weren't on maps. It produced so many possibilities, I had to constrain the model by the criteria of the area of the upstream watershed, prioritizing those with the highest area. My thought was, more area, more water to go over a waterfall!

I validated this model in the field once, at Sink Creek in Dekalb County, pictured above. It was a cool feeling to know there would be an undocumented waterfall at that location before I arrived. Interestingly, there are remnants of an old mill site there. I was certainly not the first human to stumble upon this beautiful natural feature. 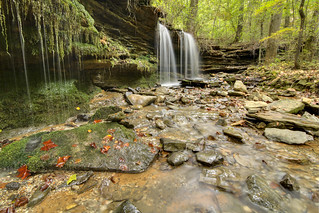 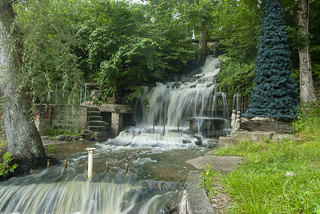 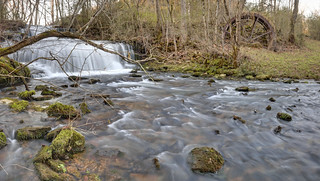 A number of smaller waterfalls can be found at the contact of the St. Louis and Warsaw limestone. There appear the be localized chert and shale beds between the two layers causing the waterfalls to occur. In some places the contact is underground, in others is is exposed on the surface, as shown above. It always emerges from a karst spring (where a cave is something accessable), flows a short distance, and makes its drop down into the Warsaw. 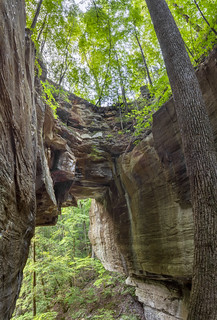 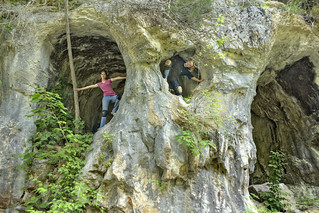 Sometimes, during the natural process of cave formation, erosion occurs in such a way that arches are created. In the example up and to the left, Medley Arch in Fall Creek Falls, was created because a large cave passage collapsed two entrances, and grew. Only a thin slice of Hartselle sandstone remains upon what was once the roof of the cave.

Bigalo Jingoist Hole, AKA Z Hole, pictured up and to the right was likely the result of a meander in the East fork of the Obey River. Large caves have been formed as that river wound through the valley, occasionally changing course to run through the dissolving limestone on the flanks of the rim. As the valley lowered, stream channels were abandoned and became paleo-trunks in these large caves. 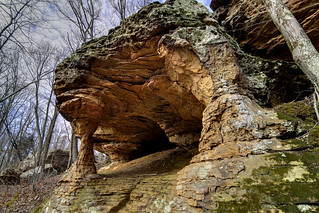 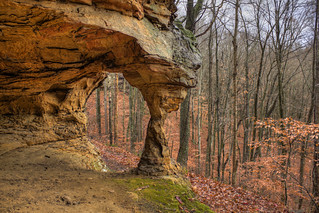 Pictured above are some of the finest examples of natural sandstone arches in the state, and they are tightly clustered in a single, very accessible area. They also represent one of the few sandstone arches on the Eastern Highland Rim. In contrast, the Cumberland Plateau just above this physiographic province has the second largest concentration of arches in North America (just behind the the region of Arches National Park).


Fine Print:
As you read through this, please understand that the classifications of landforms that I use are somewhat subjective. Fro example, some features can be called a sinkhole, a karst window, and a waterfall; all insurgences are sinkholes; etc.

I've done my best to organize information about the landforms in a specific way so as to make it easier to understand. The information that I am conveying here is based on years of field experience, mostly out looking for caves, or looking at interesting road cuts. I invite professional geologists to comment and critique me. I am certain that there may exist some mistake. In other words, if you're building a multi-million dollar facility, and you're using this blog post as a source for your work, you'll want to double-check me. I have done my best to convey factual information here. Enjoy. :)
Posted by Chuck Sutherland at 3/17/2016 No comments: