Being a State Park, this area is managed for recreation. Camping there is popular at their rustic cabins. Most people come for hiking trails, fishing, and for paddle boats or kayaking on the small lake.


Standing Stone State Forest
There seems to be a degree of confusion as to the meaning of a State Forest designation. Land management on State Forests often attract criticism due to this misunderstanding. Taken from their own website, this is their stated objective:

The Tennessee Department of Agriculture Division of Forestry has been protecting, conserving, and enhancing our state’s forest resources for over 100 years. The Tennessee Division of Forestry extinguishes 1,000 fires that burn 20,000 acres each year and helps control the disease and insect pests that plague our forests. It provides professional, timely, up-to-date, science-based technical and financial assistance to family forest landowners, communities, non-government organizations, forest industry, and others with an interest in the conservation of Tennessee’s forests.

Further the criticism they often draw is due to clearcuts. This is what they have to say about that:

Clearcutting is a forest regeneration technique that creates wide, open spaces with lots of sun exposure. This allows the most sunlight to reach tree seedlings that require full-sun conditions to thrive. Clearcutting also creates forest clearings that are habitat for various wildlife species.

Often, but not always the Division of Forestry shares some management responsibilities with Tennessee Wildlife Resources Agency (TWRA) and the State Forest will allow licensed hunting and fishing. This is the case at the Standing Stone State Forest. For questions on hunting seasons, please consult this Summary of Tennessee Hunting and Trapping Season Dates.


Geography & Geology
Standing Stone is nestled within the lower elevations of the Eastern Highland Rim and the upper elevations of the Nashville Basin, as defined by geologic context. Its landscape is defined by rolling to steep hills with few waterfalls and cliffs. The large natural area created by the publicly owned land is a refuge for wildlife, plants, and trees. In all seasons the area shows off the beauty of our region (my own personal favorite season to enjoy Standing Stone is the Spring).


Waterfalls
While Standing Stone isn't known for its waterfalls, there are a few noteworthy ones within the park and state forest.


Botany
Protection of such a large swath of land has made the wildflower seasons a delight. The sloping hills, with seeps of water at random locations all provide lots of microbiomes for different plant communities to thrive in. Additionally, karst microclimates provide places for plants with cooler preferences. 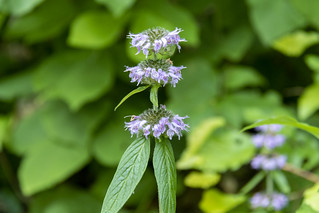 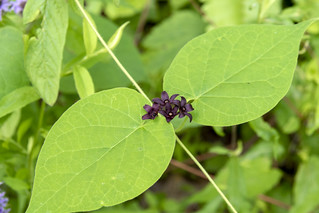 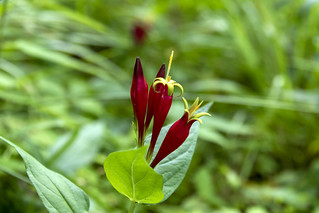 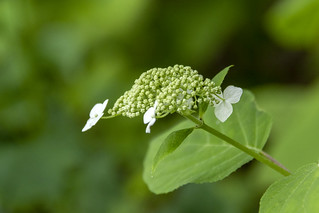 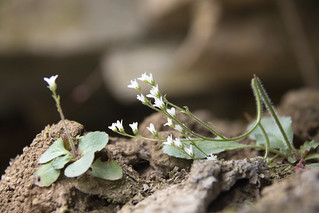 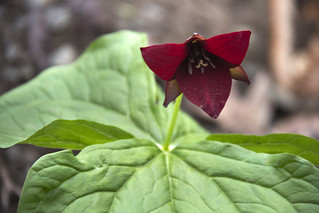 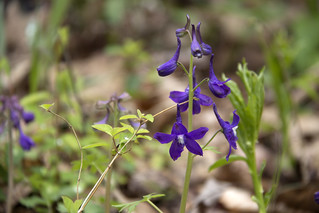 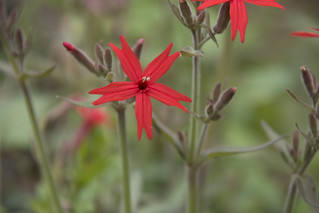 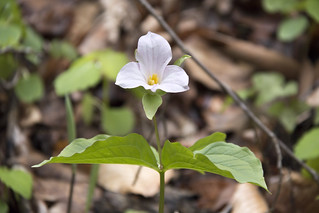 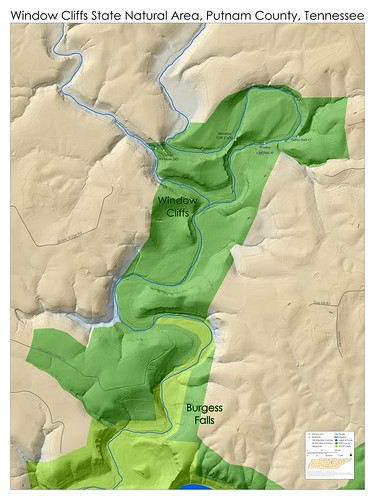 Geography
Window Cliffs State Natural Area is located on the Eastern Highland Rim of Tennessee. It is a few miles south of Cookeville, and within Putnam County. It is within the Upper Cumberland region of Tennessee, and within Middle Tennessee.

Cane Creek flows through the designated natural area before its confluence with the Falling Water River at Center Hill Lake.


Botany
In the valley alongside Cane Creek one can find abundant flowering patches of phacelia, phlox, and trilliums. Along the rocky ledges and cliffs watch for bright red flowers of columbine. In a few places you'll also see usnea clinging to dead trees and be reminded of Spanish moss. 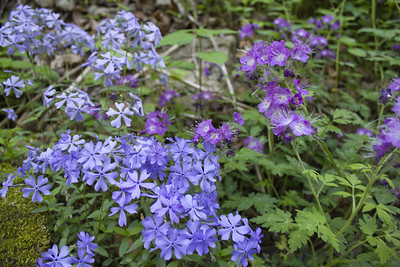 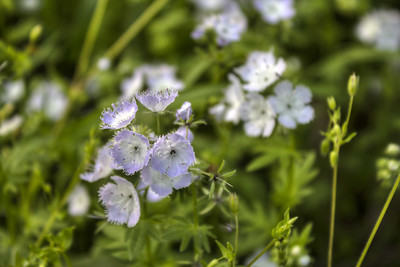 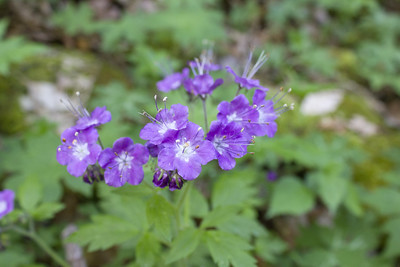 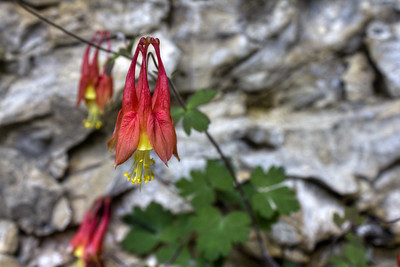 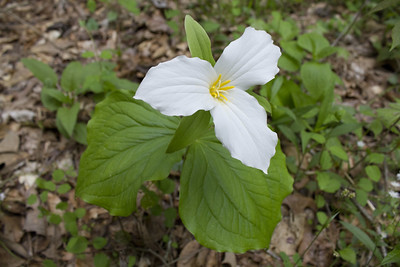 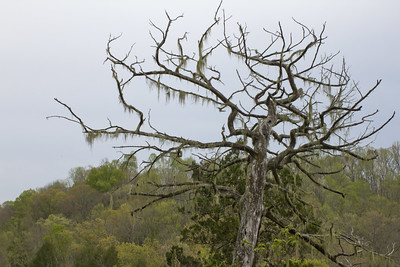 Geology
Cliffs of Fort Payne Limestone atop steep slopes of Chattanooga Shale are the obvious geology throughout the park. The base of the valleys is Catheys-Leipers Limestone, but doesn't play a large roll in the story that one sees at the Window Cliffs. 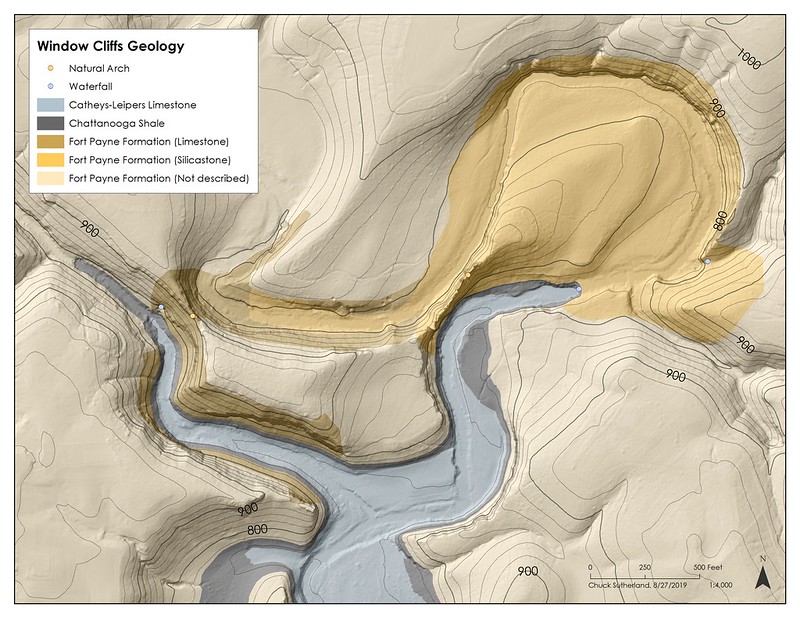 In the above recreation of a map made by Hugh Mills, Larry Knox and students in 1984, one can see the distribution of the more brittle silicastone Fort Payne facies that is partially responsible for the arch formation. 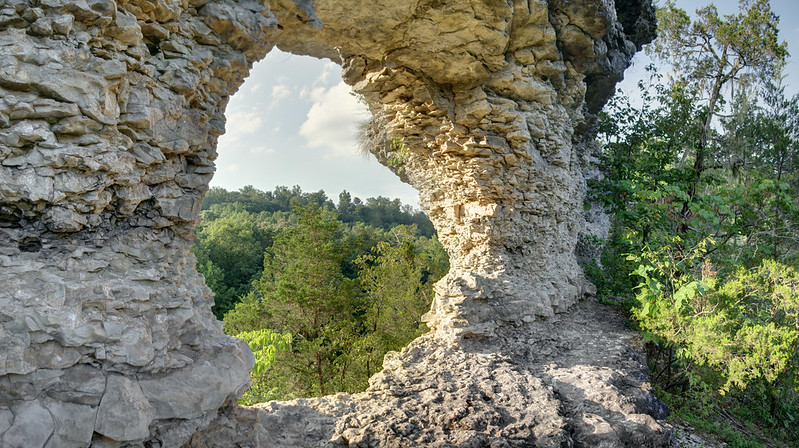 The recession process is driven at least partially by the oxbow bend of Cane Creek some 80' below the cliffs and arches. The stream carries away sediment, which is replaced from above as slopes gently give way to time, or by the occasional flood and slope failure. As the angle of repose reaches its maximum more sediment is carried away, and more material from above replaces it. 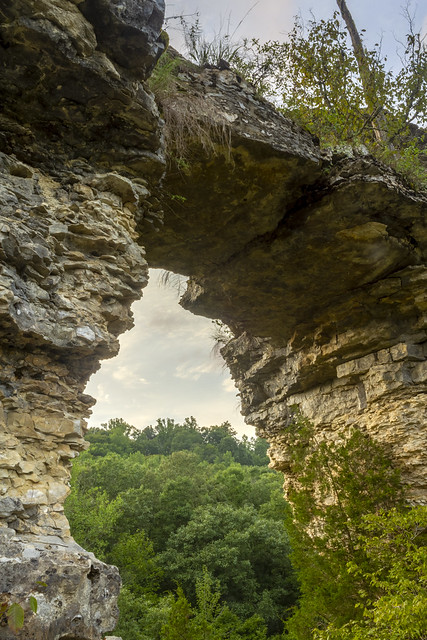 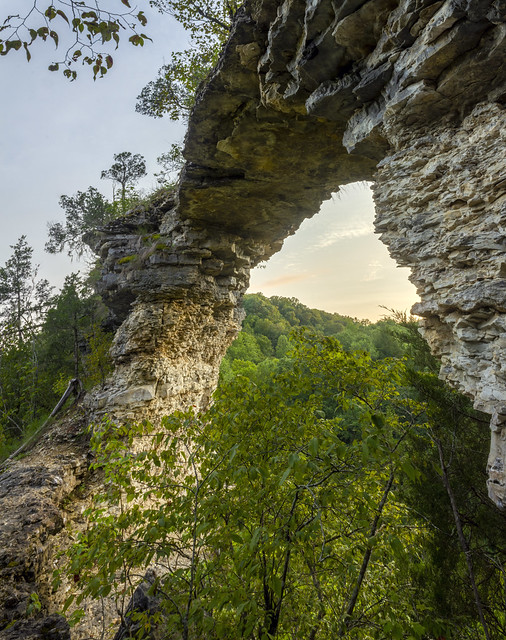 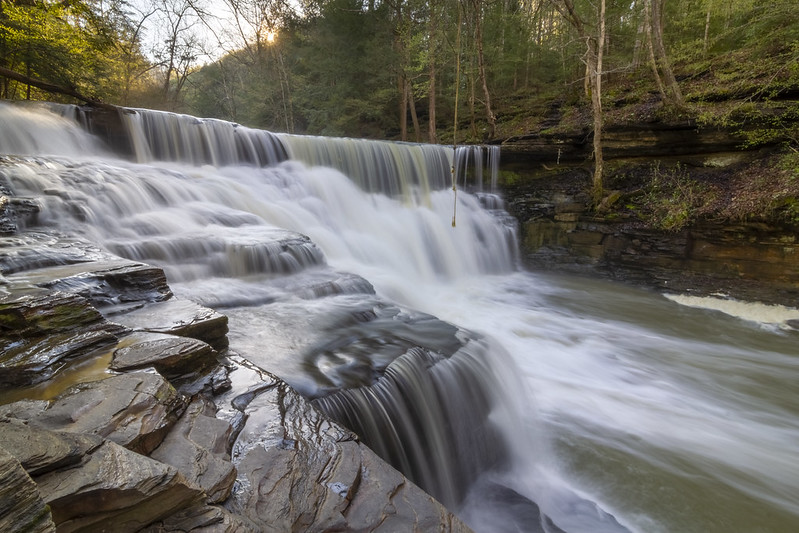 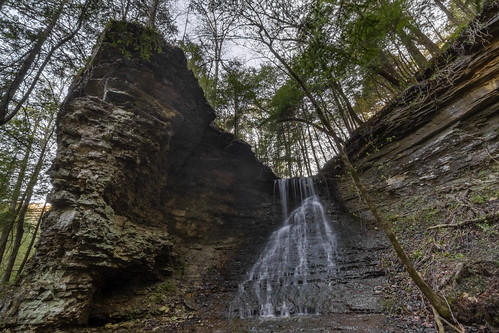 Window Cliff Falls, located on Cane Creek, is a classic Fort Payne and Chattanooga Shale contact waterfall, which is very common throughout the region. The falls drop about 30' into a small, swimmable plunge pool. There was once a rope swing there, but I am unsure if it is present since the state took ownership of the land.

Other, nearby waterfalls are also formed at the Fort Payne and Chattanooga Shale contact. However, Oxbow Falls, pictured right is formed at a steep portion of the Fort Payne on an unnamed tributary of Cane Creek. It's an unusual area, but worth wandering off trail to see. 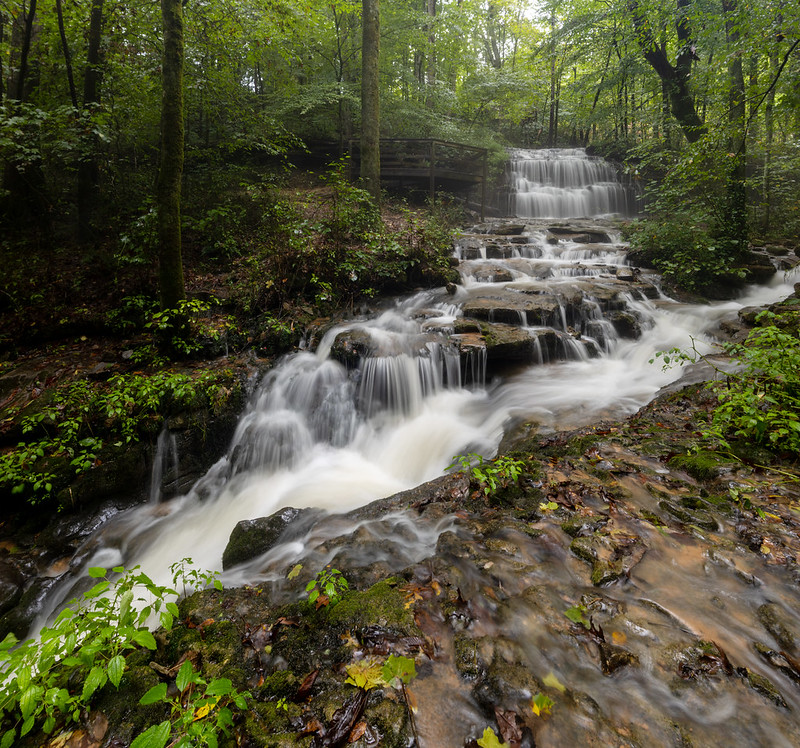 City Lake is an articifial impoundment located near Cookeville's Eastlake subdivision. It is within property managed by the city of Cookeville as a park, named City Lake Natural Area.

While the history of City Lake in Cookeville is fascinating, I could never cover it as well as Jennie Ivey has. I will simply leave you with a brief explanation of the local geology.

The karst spring which feeds the waterfall is formed at the contact of the St. Louis and Warsaw Limestones (more about those types of waterfalls here). It is a type of geologic contact based waterfall that is seen throughout the region. Other places include Milligan Road spring, Piper Falls, High Hope Falls, and Peters Falls (all in White County, Tennessee). The reason for this is due to an abundance of chert acting as an aquatard either in the lower portion of the St. Louis, or upper portion of the Warsaw Limestone. This prevents water from moving vertically and forces its lateral flow downhill.

While City Lake Falls has one distinctive main spring, the entire geologic contact erupts with waterfalls during high water events. This suggests the possibility of other as of yet undiscovered conduits feeding to this location. 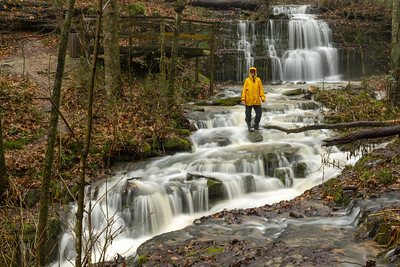 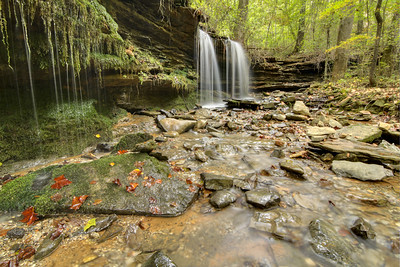 The lake below the waterfall, City Lake, is currently at the end of its life. Since its impoundment, sediment from the watershed above has slowly been making its way into the lake, and settling out. Sandbars have developed within the lake which are now growing grasses and shrubs. The transition between a lacustrine enrivonment and swamp is well underway. If this continues, it will disrupt some of the recreational uses of the park, like fishing and kayaking. As Jennie's article above mentions, there are those in the community who wish it to be dredged of sediments so that it can resume function as a lake.

Others in the local community, and those prefering a more enrivonmental agenda prefer to see that it be returned to its original environment and the dam removed. Dams fragment natural ecosystems and their removal restores the migration of animals, nutrients, and sediments within the riparian system.

An argument could be made for either side. Only time will tell how Cookeville chooses to manage this resource. 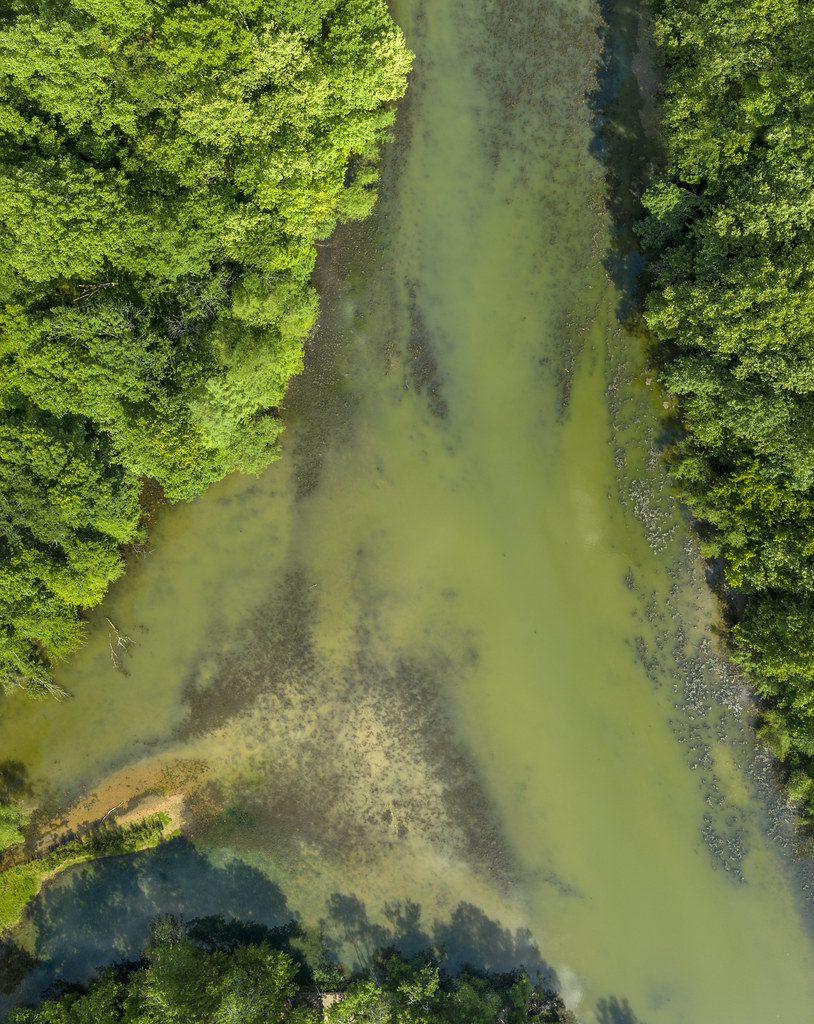 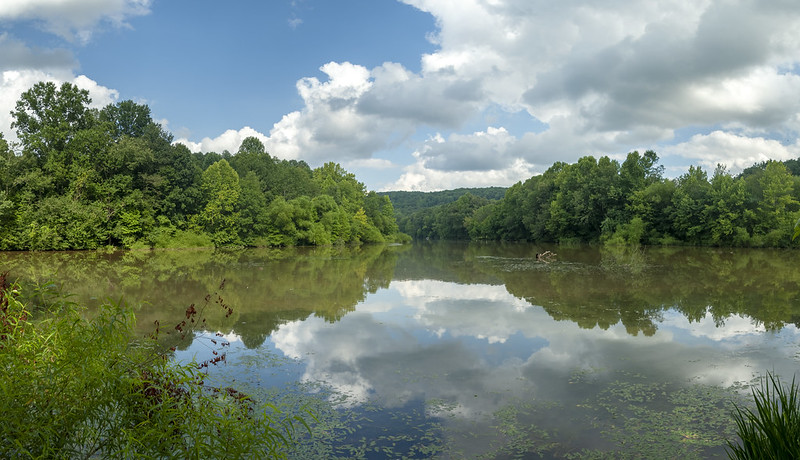 Throughout a caver's career, certain caves stand out as important, or defining to them. One such cave, which I will refer to by its archaeological name, Unnamed Cave 61, is such a cave for me. I was present when the discovery of its prehistoric art was first made. It was a cave which I was able to lead a team of cavers to for what we at the time believed to be the first time. I later learned, and corrected and updated an existing cave's location and moved our records over to it. The original cave point was thousands of feet away.

This cave I have come to think of as "mine" though I in no way own or have any rights to it. But we take things seriously which are personal, and vice versa. I am aware of the faults in this viewpoint, but it's also an extension of my own love for this particular cave.

All that serves to preface my walkthrough of the cave, and its amazing contents.

Unnamed Cave 61 by Morris on Sketchfab

This first panel has some spectacular interpretation, which I will attempt to provide you with. The main panel has a geologic feature called a styolite (8) that runs across it. The artists appear to have used this naturally occurring geologic feature to separate the underworld with the land above within the context of their art. Knowing this about the styolite one can clearly discern the three realms of Native American mythology: The heavens, Earth, and the underworld.

In the heavens, one can see a star shape (1), likely representing the sun. In the underworld one can see a cresent moon (2), and a pack of quadrupeds (4). The right-most quadruped is turned vertical approximately 90 degrees (6). Around the corner, is the warrior (3) with a headress on and bow drawn.

The Earth portion of the panel includes a figure, dubbed "Touchdown man" (5) who has his arms thrown to the heavens. Another quadruped (7) is visible and deep scratches (10) which mar a portion of the pictograph. The scratches are believed to have been from a later Native American that visited the cave. Perhaps they disagreed with the symbology, or wanted to have their own conversation with the cave.

Returning to the warrior, his placement is important within the cave. He is hiding around the corner from the entrance of the cave, weapon ready. He is guarding the cave with his pack of quadrupeds - or perhaps they are dogs. The last dog, the one turned vertically is drawn that way because it is metaphorically on the steep slope at the entrance of the cave. This spirit warrior, drawn by a Native American is believed to be the cave's protector.