I wanted to make a map of my hometown of Sparta, Tennessee using the newly available lidar from the State of Tennessee. Compared with previous maps, like the USGS 1:24,000 topographic map, the new lidar data is approximately 700 times more accurate. You'll see what I mean below.

After I produced it there were just too many odd little things that were worth explaining. The first half of odd things are natural processes on the Earth that produce a specific form, or in more scientific terms, the features are of a geomorphic nature. The remainder of forms I want to share with you are human formed, or anthropogenic. 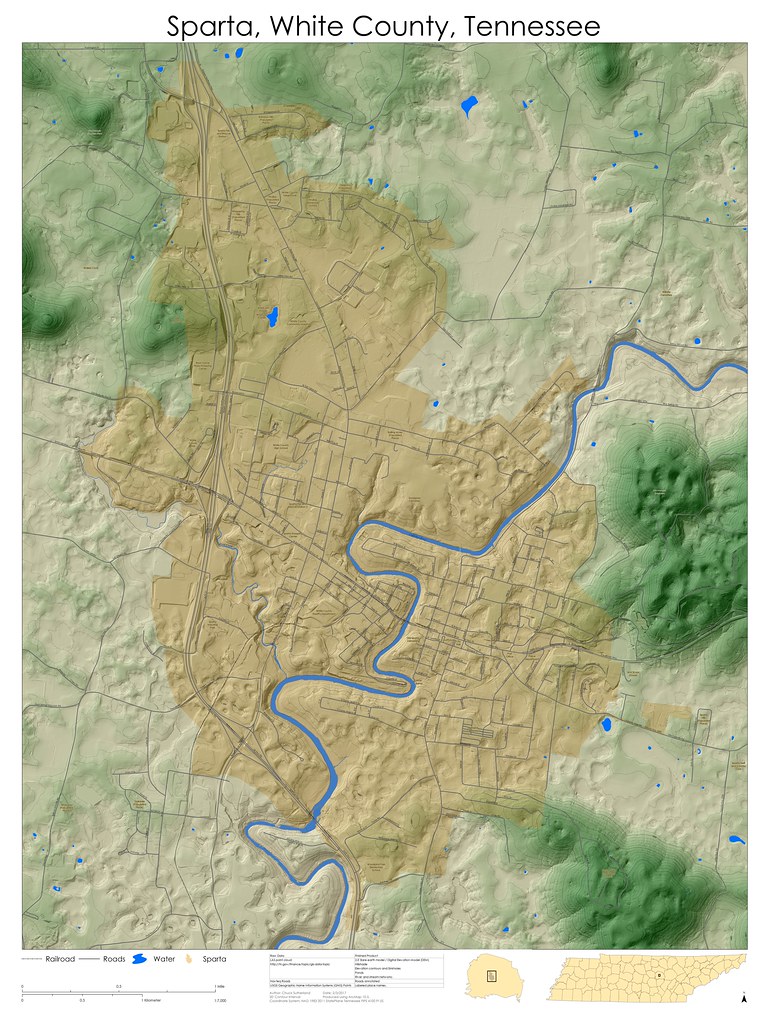 Below is the stuff I thought was interesting. Feel free to follow along if you've downloaded the hi-res map. 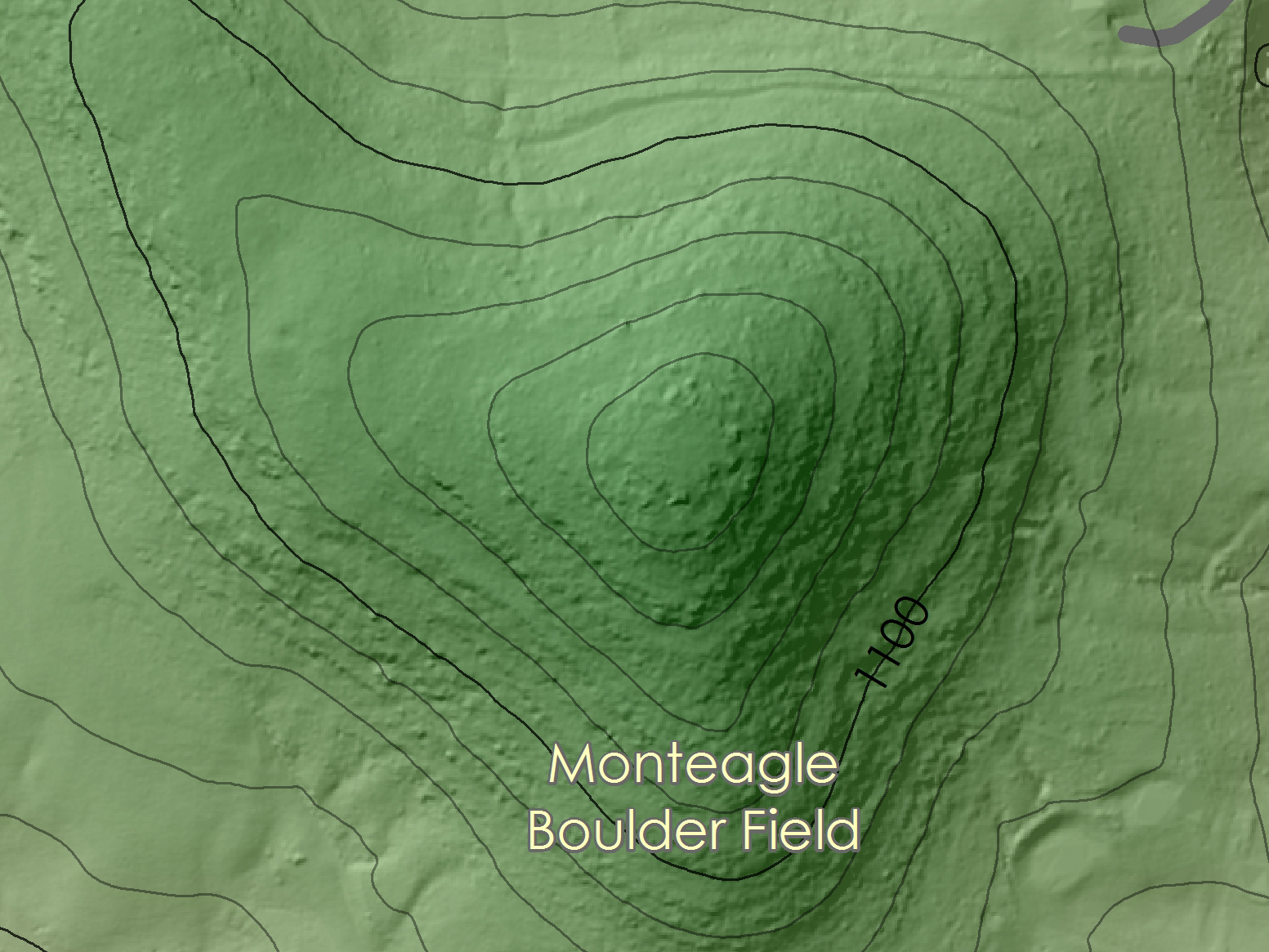 In the north-west of the map, here are two small green colored mountains that rise around 300’ above the surrounding landscape. Look closely at the hills and you will see that they are quite rough. If you’re looking at this in real life, you’ll see a bunch of grey rocks jutting up through a thin layer of soil. This landscape should be familiar to many locals, but it’s unlikely that most have considered why it is this way.

The Monteagle limestone is our most prolific producer of caves, with 34 percent of documented caves in Tennessee being formed entirely or at least partly within this strata (TCS 2016). That’s the same reason the landscape is boulder-strewn with little to no soil. The caves exist because the rock dissolves and leaves little insoluble material behind. What remains is a thin soil that doesn’t completely cover the bedrock. This is exposed in many places across White County. I have taken to calling those areas Monteagle boulder field. Also noteworthy, but not surprising, is that there are few structures on this type of landscape. 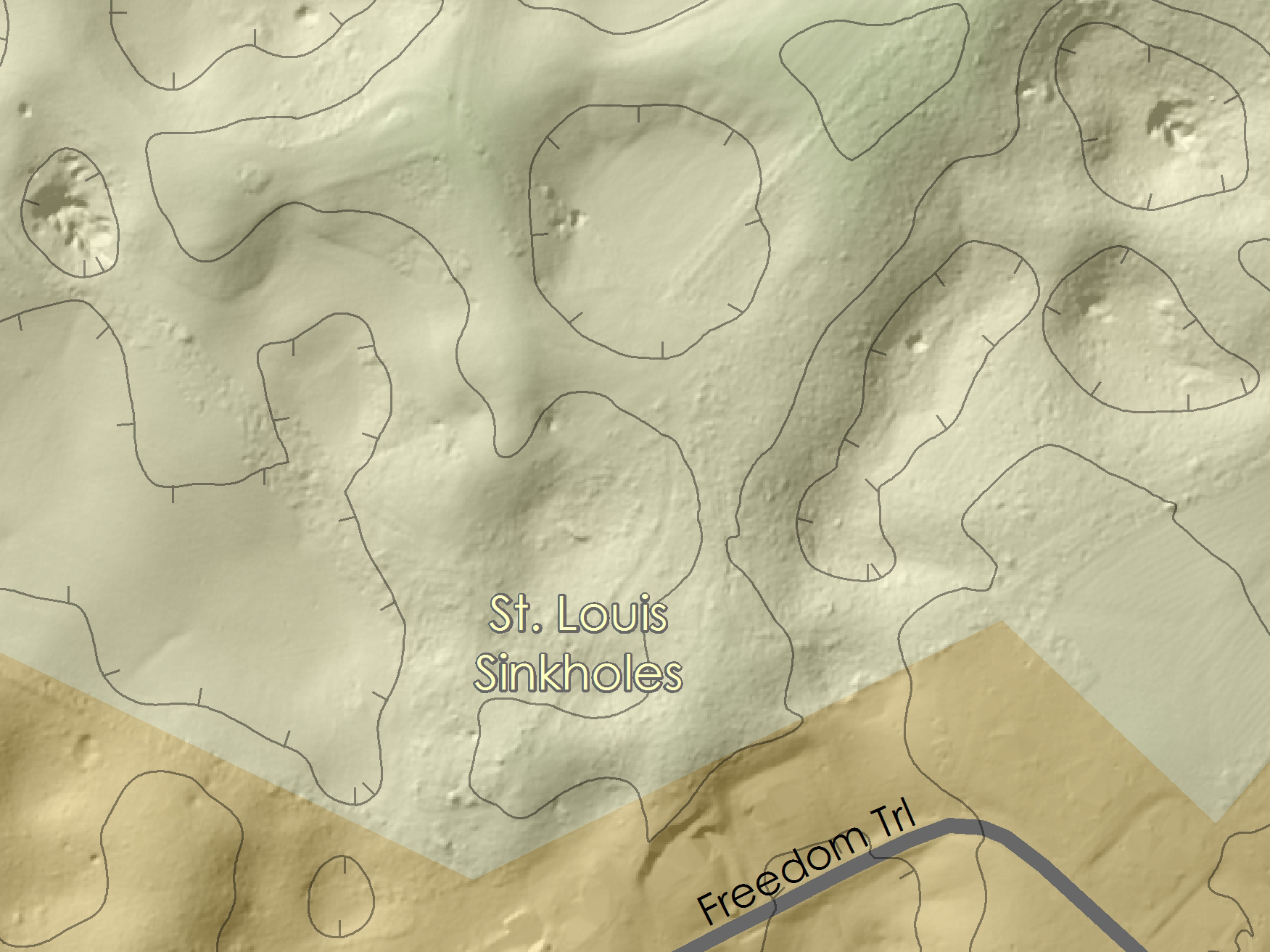 On the eastern border of the map, at the half-way point of north and south, one can see the foothills of Dibrell Mountain, where Highway 70 winds its way up to the Cumberland Plateau. In those foothills there are large sinkholes that look like pockmarks on this map. Contrast those with the St. Louis sinkholes mentioned below. Moneagle sinkholes are more circular, and in this particular location are around 60’ deep. Some of the larger sinkholes are not exactly circular, which is likely result of two or more sinkholes combining.

East of the center of the map (and in many other places), a line of shallow sinkholes runs north to south down to the Calfkiller River. Comparing these sinkholes with those of the Monteagle limestone a few things should be apparent. They tend to be less circular, some have visible drainage channels within them, and many of them have distinct swallets (looks like a steeper sinkhole inside the sinkhole). They rarely occur isolated and are more often found in large irregularly connected networks. The networks are remnants of collapsed stream caves. It also may be evident that there are few smaller surface streams on this map. This is due largely to the St. Louis limestone’s high solubility forcing streams underground. 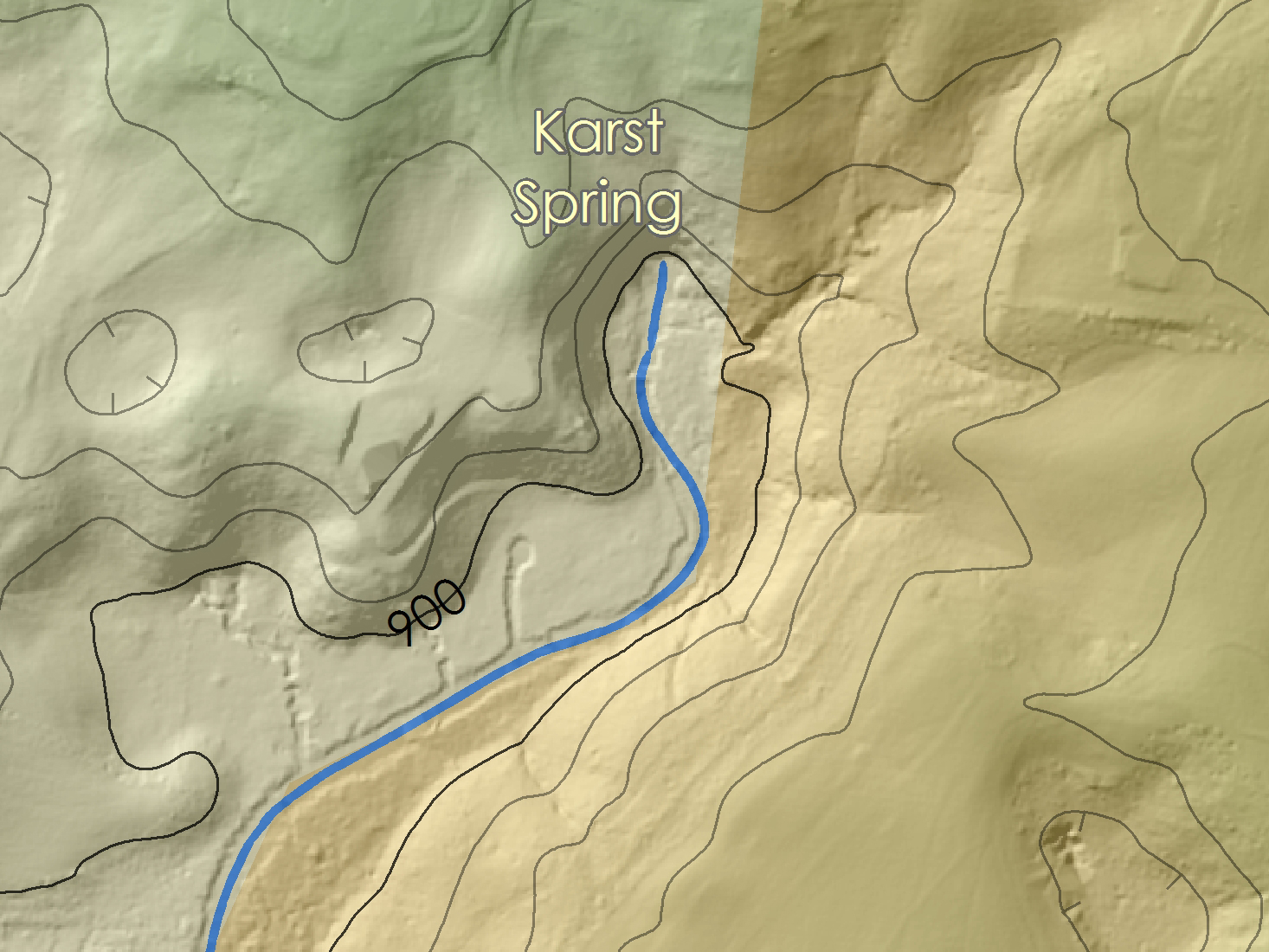 If the streams are underground, then they must surface at some point. By following Town Spring to its source you can find this location on the map. Karst springs are places where the rivers emerge. Often what they look like is a low shelf of boulders with water coming from in between them. As a caver, I would love to be able to get into all the caves behind them, but few are accessible. 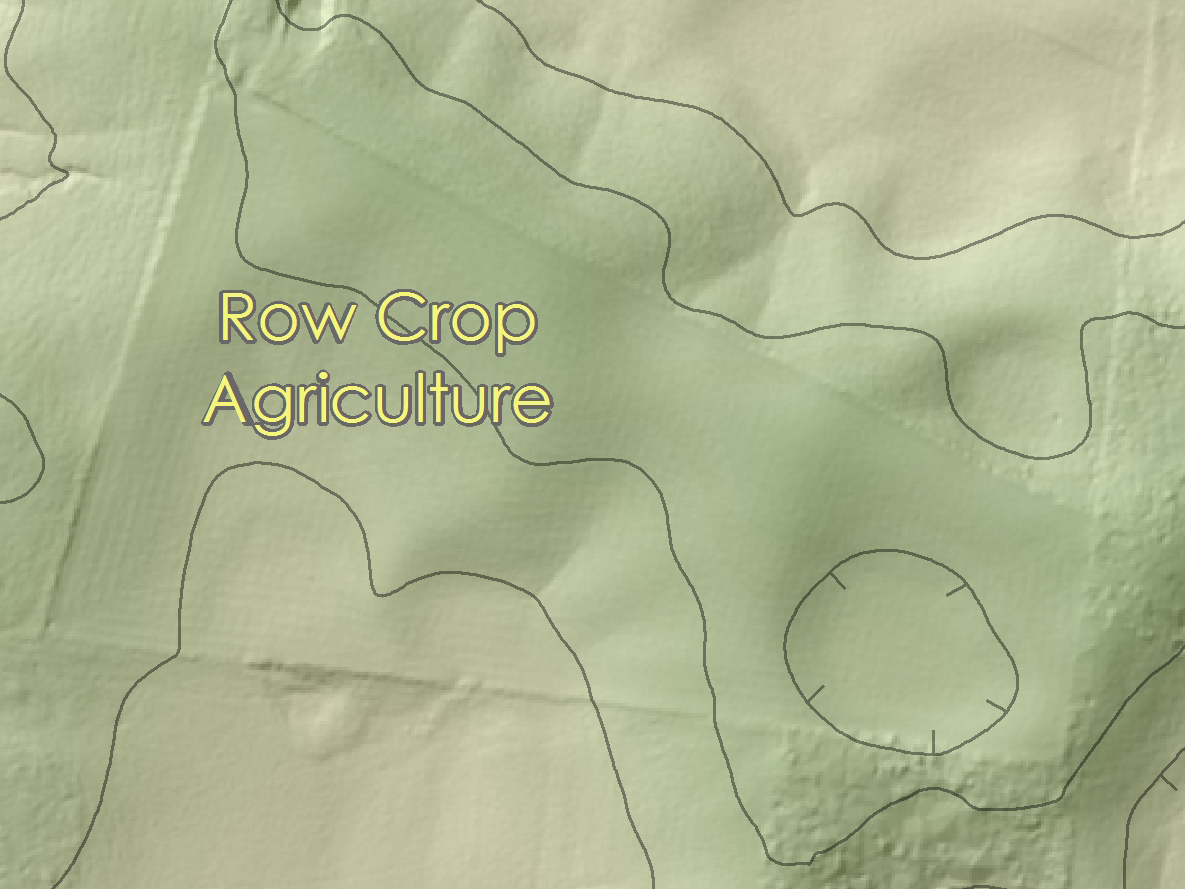 You know where Walmart is (that’s not a question). Look west from there on the other side of County Highway 1161. There you’ll find a distorted rectangular property with an interesting pattern on the soil. Those are overlapping rows, possibly where the farmer dug rows at a different direction than a previous year. Several other examples of rows can be seen if one looks closely. 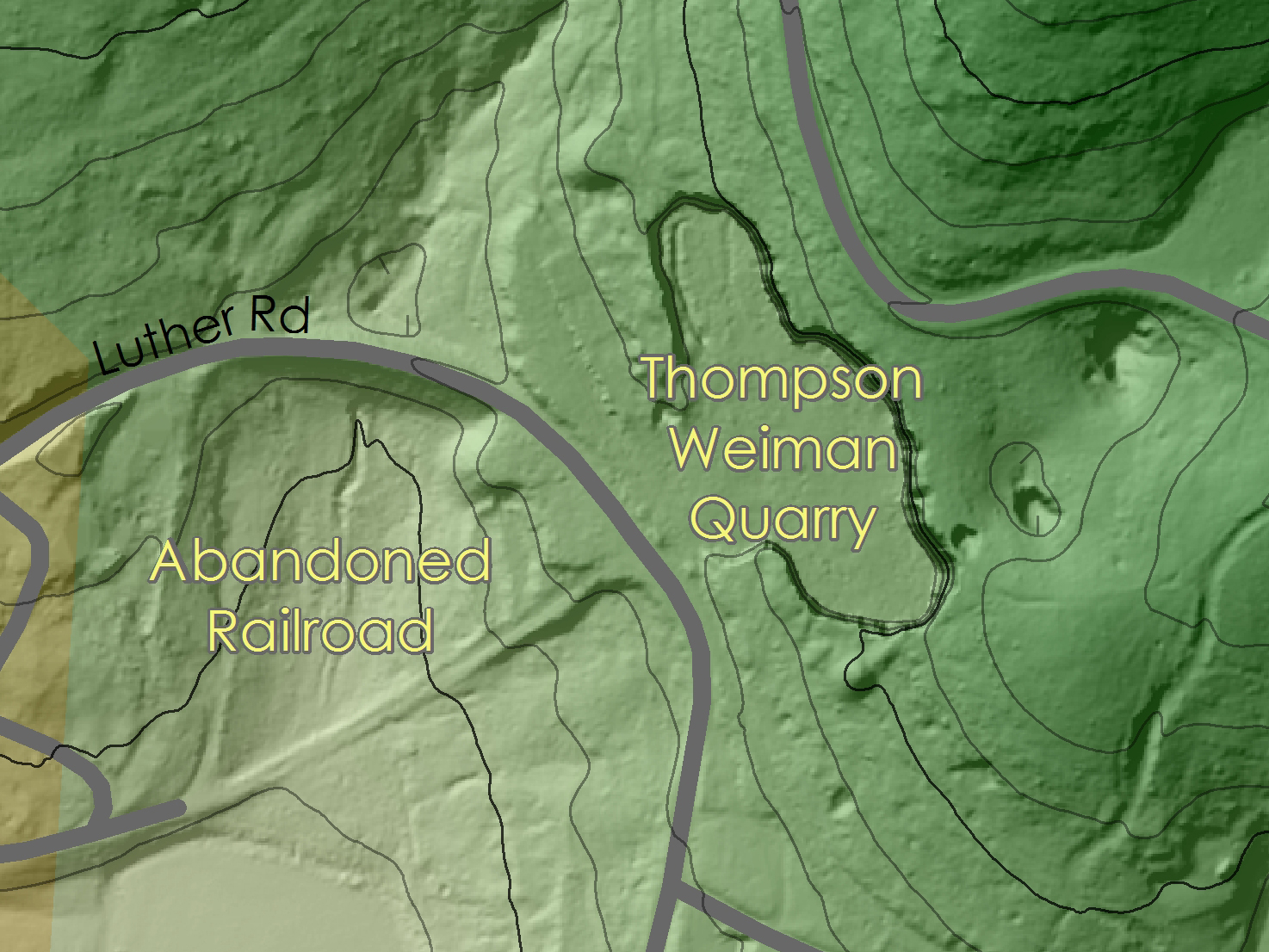 Many Spartans are familiar with this large abandoned limestone quarry, but if you need help finding it on the map, look to where Highway 70 is on the east side of the map and go a little north.

Abandoned Railroad
Following the obvious linear railroad bed south-west from the Thompson Weiman Quarry, one can follow what was once the route of the railroad. The line traces Nent Flatt St, turns southward at Baker St, and almost disappears until the south side of Gaines St. The railroad would have started westward, crossing South Young St and the Calfkiller River (using the same bridge as the current pedestrian walkway), and heads north towards the White County Sheriff’s Department where it would have joined a spur rail to the north which is, surprise, on Depot St. The modern rail line begins at roughly the intersection of these two historic lines. 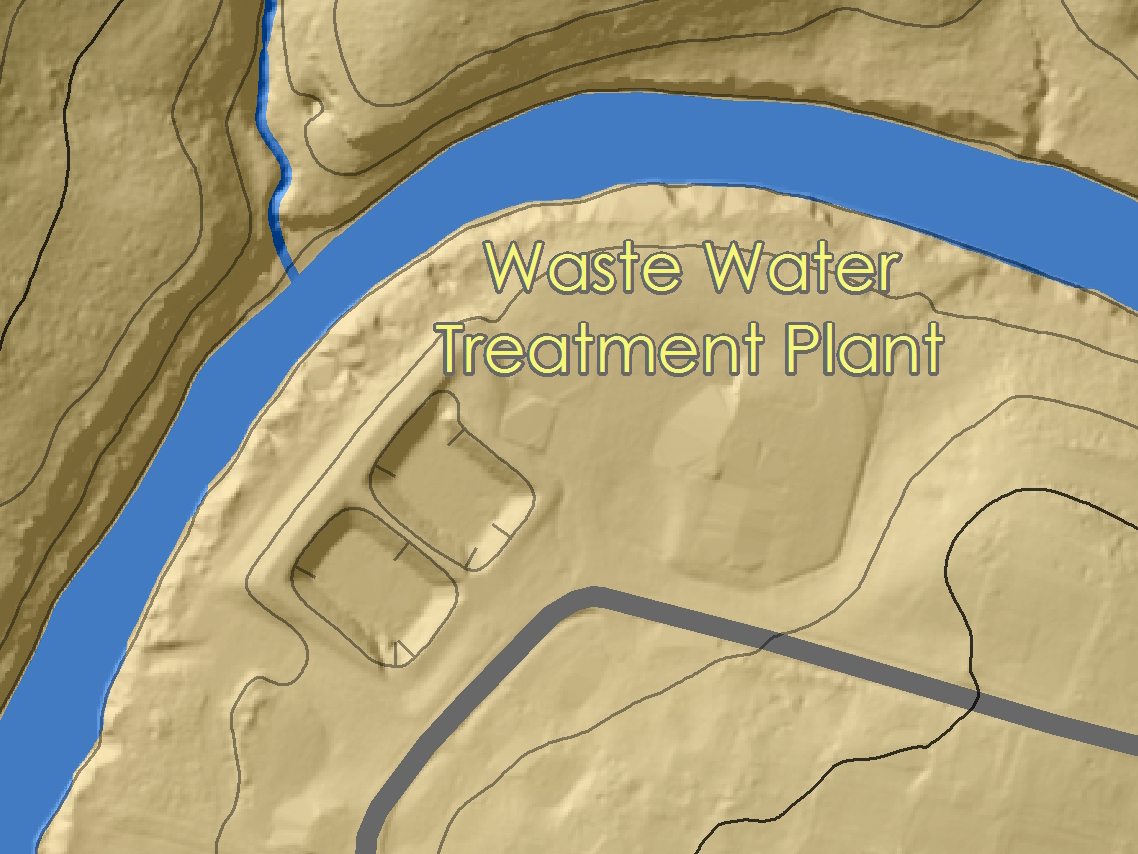 Almost dead center of this map is where our sewer waste goes to be treated. Two large pools can be seen.

Low head dam on the Calfkiller River
Downstream from the waste water plant, just before where Calfkiller River goes under Highway 111, there is a low head dam. Many of us have seen this as we have driven past. Have you ever wondered wh it’s there? Read on. 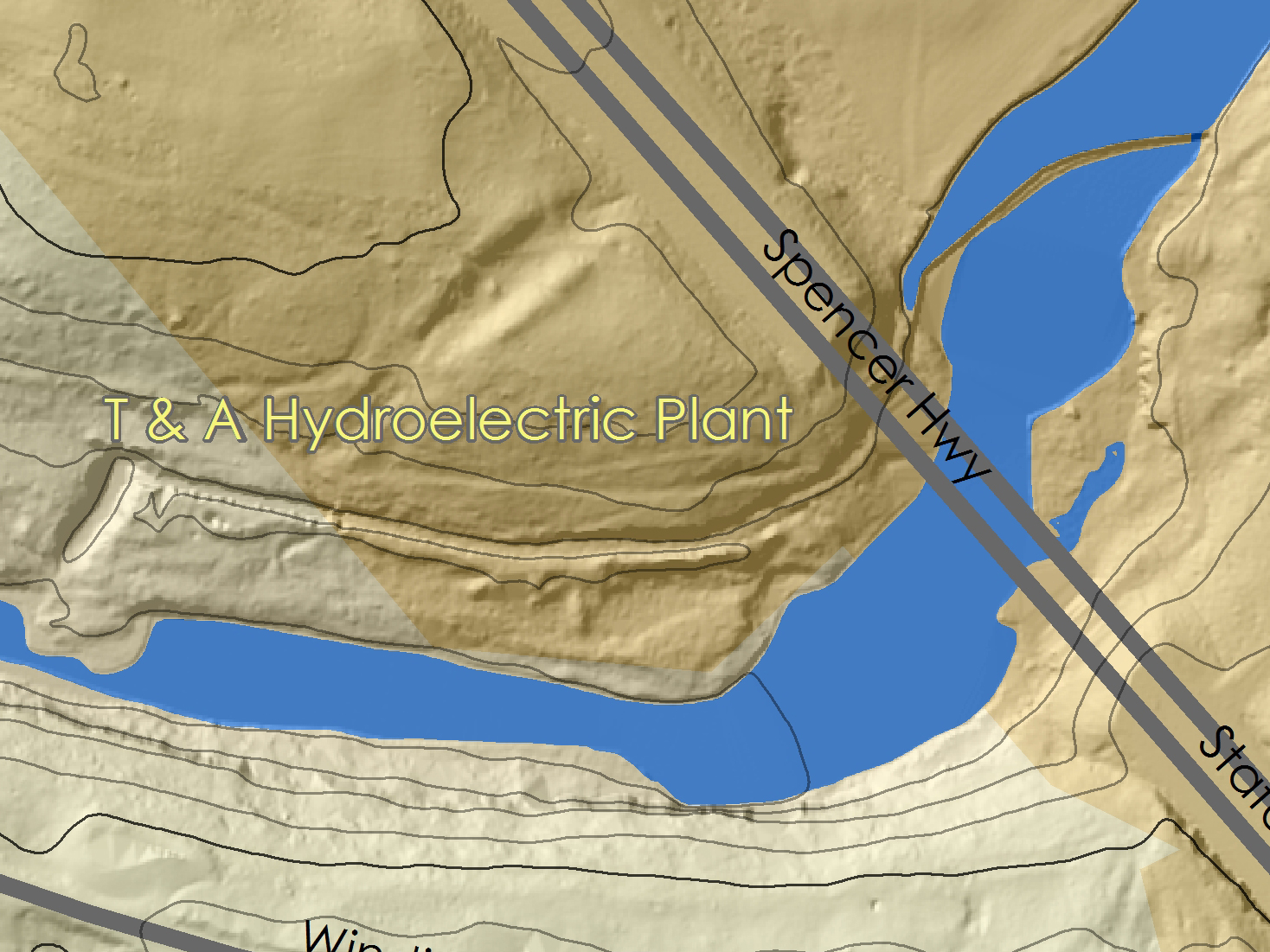 Following the north shore downstream of the previously mentioned low head dam, there is a linear feature which runs parallel to the river. This is a causeway along which water from the river was once diverted to run a powerhouse. The causeway, and much of the poured cement structure are still in place, as well as the powerhouse itself. 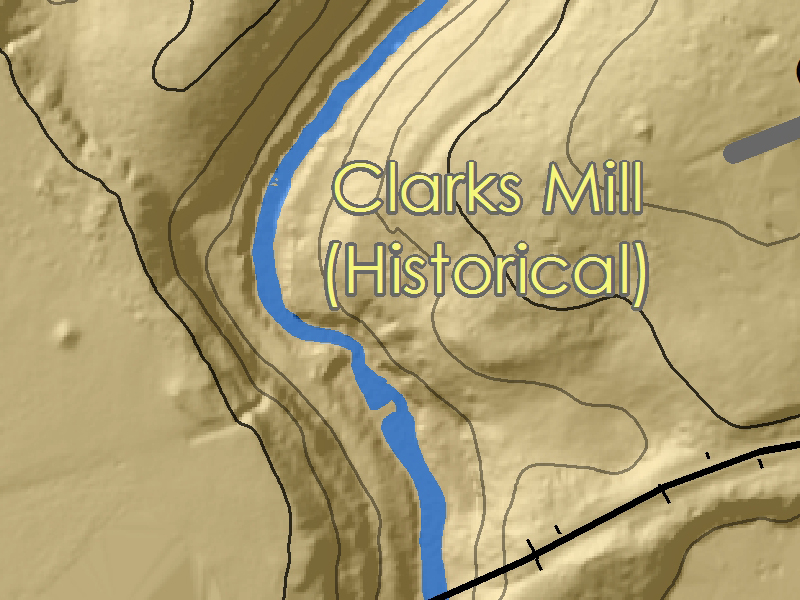 On Town Creek, just north of where the railroad crosses overhead, I found curious evidence of a large dam that failed. Until the creation of this map and the integration of the GNIS dataset, I had not been able to identify the structure. Looking at this map, one can now only see two lines perpendicular to the stream which represent parts of the dam structure of the mill. 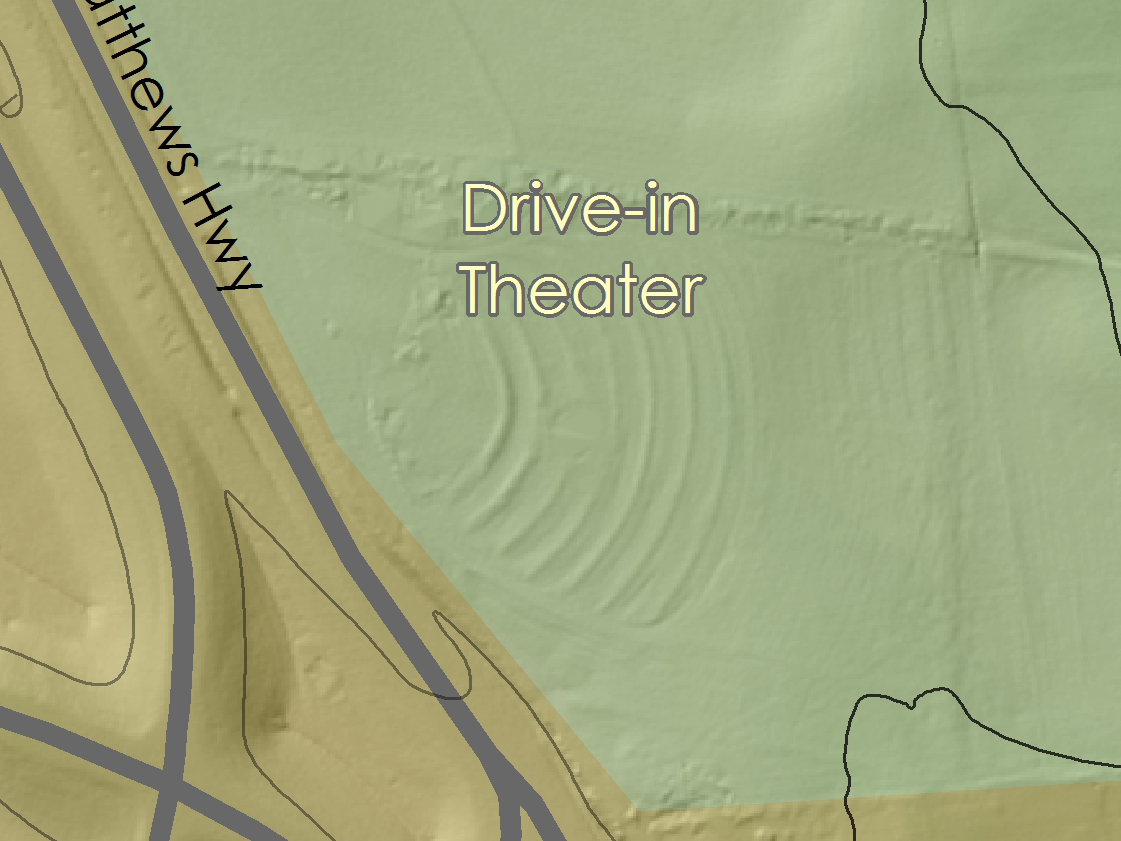 Just outside the city limits of Sparta, on the north side and east of Highway 111, one can see moved earth in a radial pattern. If you’ve enjoyed watching movies at the Sparta Drive-In, then you’ll immediately recognize that those are the low rises for each successive row for cars to park in.

Wow! This is great. Thank you for making these maps. I am a geospatial professional as well and I appreciate the time that you put in to making this lidar presentation public knowledge.