The Life and Death of Tires-to-Spare Cave

Tires-To-Spare is a fascinating cave whose entrance opened violently on April 25nd, 1994. The roof fell out of a previously unknown cave system exposing a passage down into the dark.

In the video below, retired geology professor Ric Finch tells of its original exploration and what was found within.

A description of the cave, written for the Tennessee Cave Survey by Ric Finch reads as follows:

The sink entrance is 101 feet long, with a maximum width of 43 feet, and 31 feet deep. The entrance chamber is 50 feet by 75 feet. Two small holes through breakdown lead to the upstream passage. This solution passage carries a permanent stream and is subject to frequent flooding. Conduit dimensions are typically 15-20 feet wide by 10-12 feet high. The main conduit has been mapped 577 feet upstream from the breakdown, trending nearly due west, to a point where the ceiling lowers and the passage is submerged. There are several short loops and on significant side passage, for a total of 1230 feet in the upstream passage.

Downstream from the entrance chamber, through two small holes in the breakdown, the stream passage continues 200 feet to terminate in a permanent sump.

A dye trace performed in April 1995 shows that the cave sump pool and The Canal sump pool are one and the same, and that both streams flow into Ament Cave (PU1). A dye trace on April 8, 1995 connected Ensor Sink to the cave. Warning! This cave is subject to flash flooding. (Ric Finch, 1995)


The day after Christmas in 2016, approximately a week prior to the above video being filmed, myself, Ric, and Alfred Crabtree visited Tires-to-Spare cave, in what would be the last documentation of the cave. 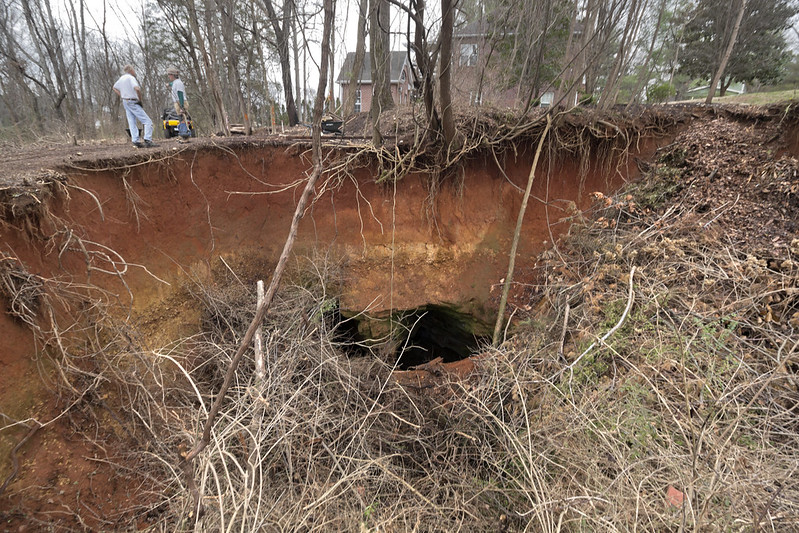 Ric chatting with the landowner. Note the thick soil profile above the bedrock where the cave entrance is. 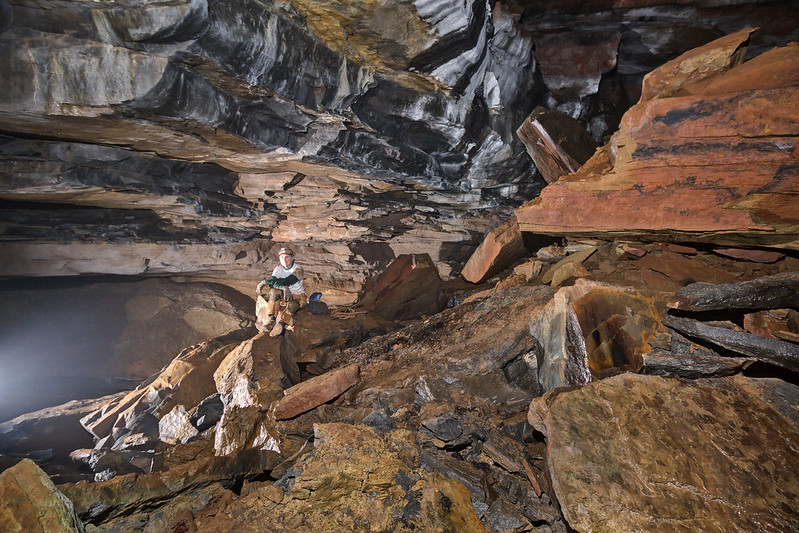 This photo was taken just inside the cave. The deep reds and blacks are weathered and fresh faces of the Warsaw Limestone in which the cave is formed. The talus slope that Ric is sitting on drops nearly to to the stream level of the cave. 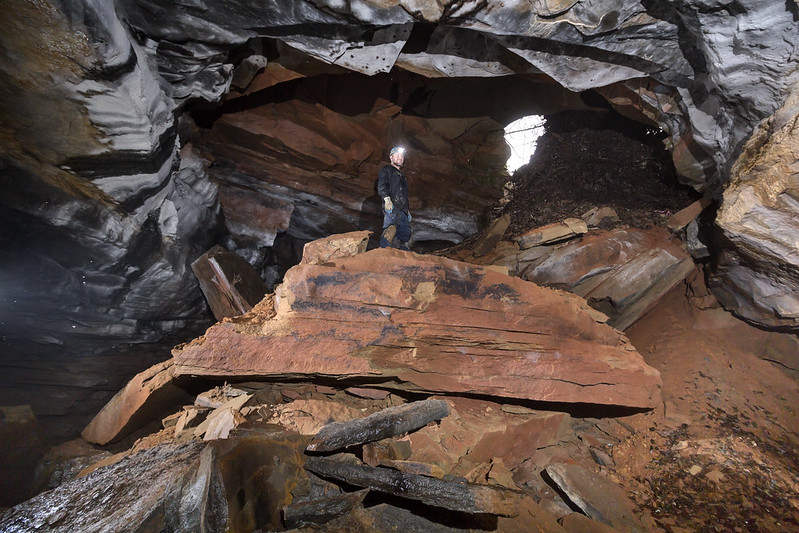 Looking back out of the cave, Alfred gives us more perspective on the size of this cave. Despite the collapse being 20 years old at this point, large boulders moved and rolled as we walked over them. In geologic time, 20 years is quite new. New caves, and caves not often explored are more dangerous in this way. Our trip was likely one of just a few (if any) that had happened in the last five years. 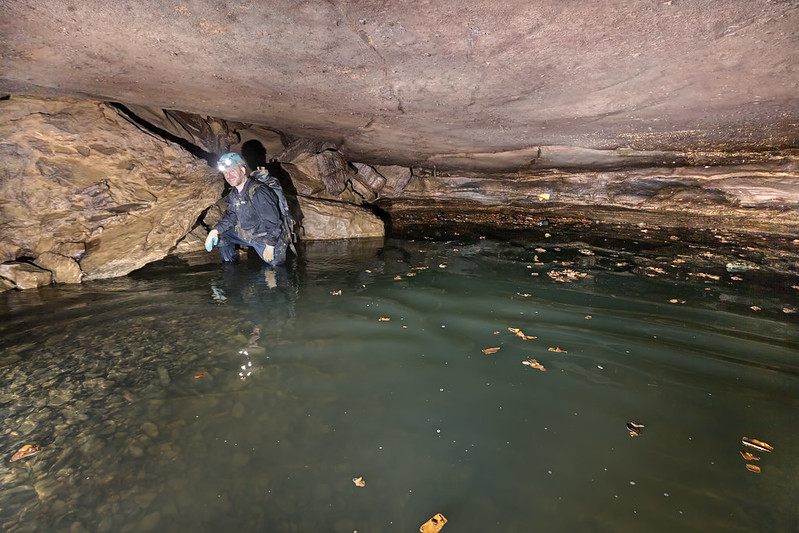 This photo of Alfred in the terminal sump shows floating garbage. If you've watched the video above, there was once  considerably more trash in this location. Despite it being less terrible, it's still not pleasant standing in water like this. 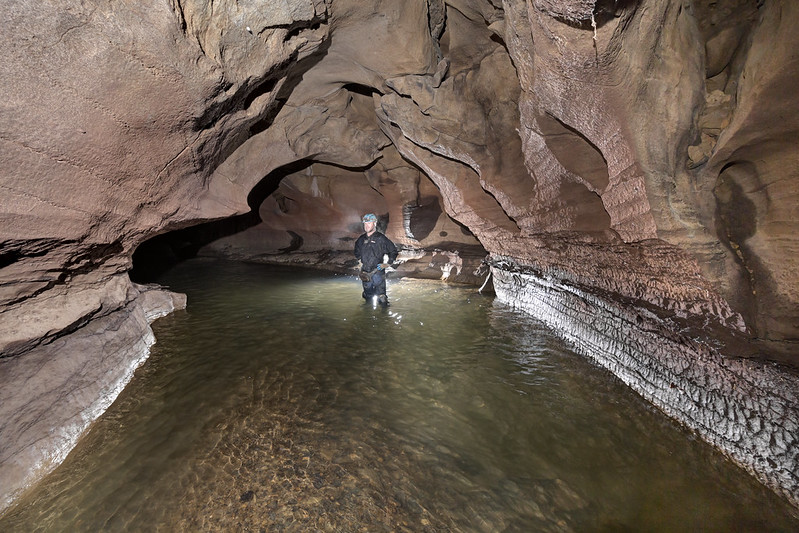 Further upstream from the sump we are close to where we popped in from the room above. This "hallway "is typical Warsaw Limestone phreatic cave passage. It exhibits scalloped surfaces, large rounded amorphous edges, and an obvious strand line. The darker color below the strand line is likely the result of natural tannins in the water which stain the cave walls.
A few years later, prior to the 2019 National Speleological Society Convention in Cookeville, Tennessee (which began on June 17, 2019), Sid Jones was researching locations for the geology field trip he would lead for said event. He wandered to the entrance of Tires-to-Spare Cave and found it to be partially filled with trees and brush and covered with soil. Later visitation confirmed the landowner's intention was to fill the cave in and destroy its one natural entrance. It is unknown to the author if the entrance is now filled, but it is strongly suspected to be the case.