I am surfing on the receding limb of a media wave that swept around the globe, gradually slowing. In this story I am not the protagonist or the antagonist, but simply someone near. As such, the knowledge that comes from perspective may be useful to someone now, or in the future, or perhaps never at all. This story will find its way to the surface likely long after the media cycle and the world has forgotten about little Jackson County, Tennessee. This story is for cavers, and for the locals who call the Upper Cumberland home. This story is for you.

This story is disconnected. It's disconnected from direct involvement with any of the exploration, and disconnected from the rescue. But these are events that originated from a disconnect, a moment where the dive line which held the diver's life separated. As you know, all things are connected, and so in this story I will attempt to connect all the lose bits.

On November 12th, 2016 my friend showed me a beautiful spring in her backyard. This property had long been in her husband's family's ownership, and he informed me that the spring was used to drive a mill once upon a time. They called it Mill Pond. Recognizing what I saw as a cave entrance (and one within the structure of the meteor impact site at Flynn Creek, making this especially interesting), I negotiated for access for a diver to check the lead.

Somewhere along the way I brought Gerald Moni to the spring and submitted to the Tennessee Cave Survey, Mill Pond. In Gerald's inimitable way, he said "It's not a pond survey." And thus it became Mill Pond Cave. 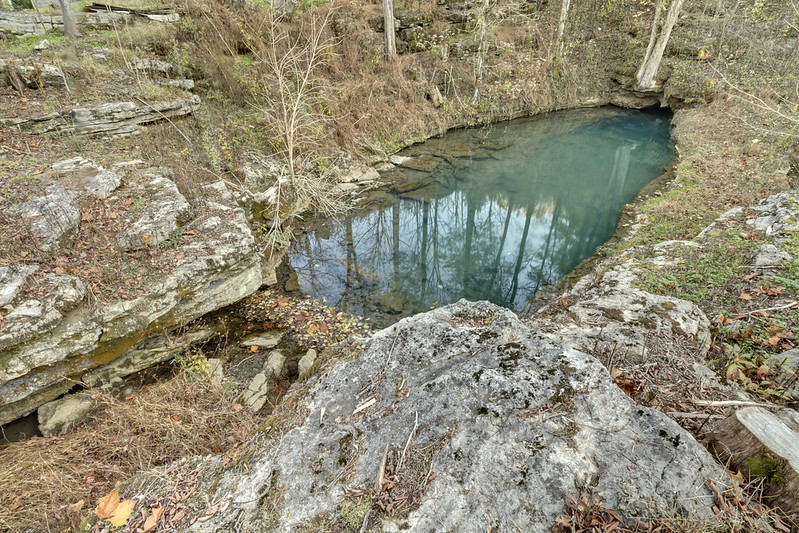 Surprisingly the landowners were excited that someone else appreciated their little bit of heaven and were thrilled to allow access. First exploration took place a week later on November 19th, 2016. Thorn Walthall, our local cave diver was interested to see what was there. After a short dive he surfaced and conveyed what he saw. 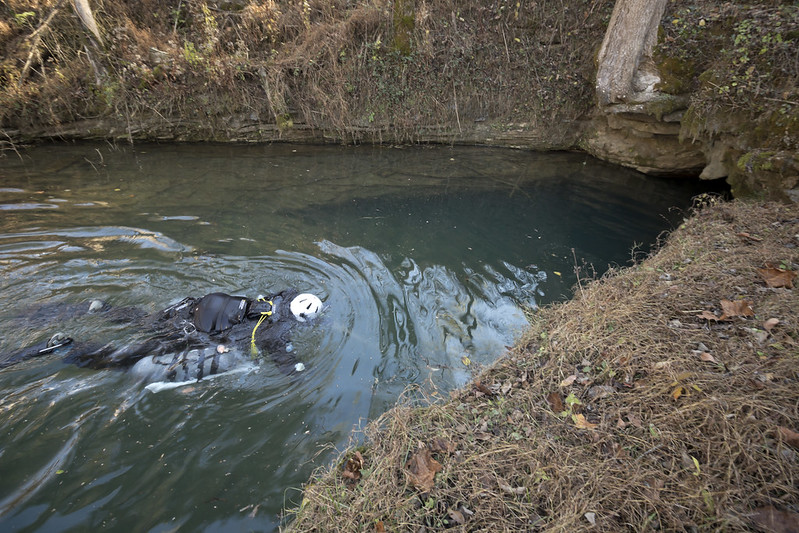 The dimensions were large, but it was a silty environment. This means that it's easy to stir up sediment which can linger and cloud visibility for long periods of time. In addition, several large trees had fallen down into the passage of the cave which obstructed safe progress. Over the next few months the landowners and he worked to remove these trees and grant access.

Thorn re-entered the cave a few more times, but was concerned to proceed further. I played "surface watch" for him once or twice, and each time was concerned, and proud that he knew his own limitations. I would rather have this lingering curiosity than the alternative.

Noted cave diver Jason Richards entered the cave on August 27, 2017, and made a line plot which documented 434' of cave. Where he turned around was a large air pocket. 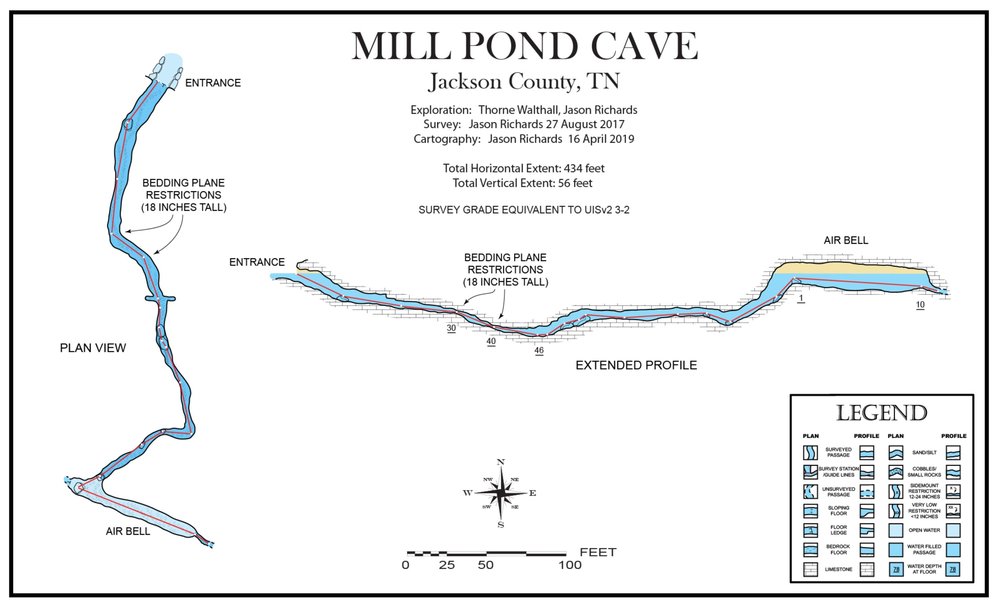 The morning of the Spring Presentation meeting of the Tennessee Cave Survey found cavers from around TAG (Tennessee, Alabama, Georgia for you non-cavers) congregated in one room hearing about such things as "Going Digital: Paperless Cave Surveying" by Jon Zetterberg, 'Karst Hydrogeology of the western Great Smoky Mountains" by Ben Miller, and "The Redcoats and Redneck Tennessee Collaboration: Surveying Mountain Eye" by Rostam Namaghi.

"Redcoat" Rostam is a medical doctor, and a caver from the UK. He and about two dozen of his friends are on expedition to the United States to explore and map caves.

Thorn approached me indicating that the Brits had asked him to show them some dive leads. At his request I rattled off a few dives I was aware of where they may get the coveted "cave booty" aka virgin passage. Among that list was my nagging curiosity, Mill Pond Cave.


Everything was fine, until it wasn't.

The morning of April 17th, 2019 I received a text message from my friend, the landowner at Mill Pond Cave. It read, "Thought I would let you know that last night some guys (friends of Thorn) were here diving and one guy had a line break. He didn't come back out so they are hoping he is in an air pocket. We have sheriff and rescue here now. Hamilton County [Cave and Cliff Rescue] got here just a big ago. I will let you know how it turns out." Subsequent text messages revealed him to not be a local, but one of the British divers on expedition.

I visited my friend that morning, the cave being a hundred feet from her house. I think anyone else would have been ruminating on liability issues, angry at anyone for the situation. My friend was desperate, hopeful, and only concerned with the man's safety. At this point, I still did not know his identity. I walked to the Mill Pond and touched the dive line leading into the cave. A story came to mind about a silver cord.

Outside of the property, rescue had setup their command station. A Twin Lakes utility truck lingered nearby, presumably working on communications within the rural valley. I spoke with some of the real heroes of this story, Jackson County rescue, and the Hamilton County Cave and Cliff Rescue Team led by Brian Krebs. The consensus was that this experienced diver would have found his way to the air bell in the back of the cave and could safely remain there for sometime in his (Thorn's) drysuit.

The plan was that expert cave divers, one from Florida, and another from Arkansas would arrive around 5pm to make the rescue. It had crossed my mind that this may be a recovery, though at times like these I don't speak such thoughts aloud. 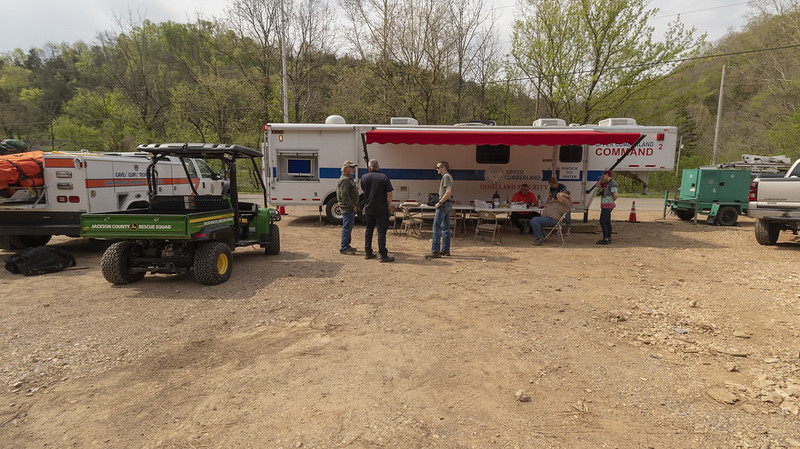 At approximately 4pm Jackson County held a press brief to communicate the situation to the public. The time of the dive was pushed back to around 6pm.

At 6:44pm I received a text from the landowner saying "Diver went down about 40 minutes ago. We are waiting".

At 6:53pm I jumped from my chair on Jason Collard's porch and hugged both Jason and Rebecca - the text read "He's out and alive!!!!". Inquiring about his health she said, "They are checking his vitals now, but he walked out of that water like it was nothing!"

I posted to Facebook this update. I didn't immediately notice the religious imagery behind a man, thought to be dead, emerging from a cave alive a few days before Easter. What happier ending to a story can there be than, "He is out. And he is alive."?