As someone who caves and explores, I sometimes find historic, or apparently historic signatures on rocks and in caves. While I am by no means an expert, I know a few things which may serve to help others provide evidence towards authenticating historic or prehistoric markings.

I want to note that we very rarely every know with certainty most things. What we can do is document the evidence and see where it points us. I should also point out that in modern times leaving a signature or a drawing in caves or on overlooks is not only a criminal act, but an unethical act. The study of how humans have previously marked their landscape is in no way advertising that we should also do the same - in fact the opposite. I will write more on this later, but leave any petty or trifiling argumentation regarding what's historic and acceptible here. The remainder of this article shall be strictly about identification.

Now, imagine that we've been wandering in the woods for hours and come upon a cliff with a signature. We investigate it. I think it's potentially historic. You say, "Any fool can write a date that is incorrect, so how does one authenticate an alleged historic signature?"

Let's explore a few signatures and examine their style, medium, and context. 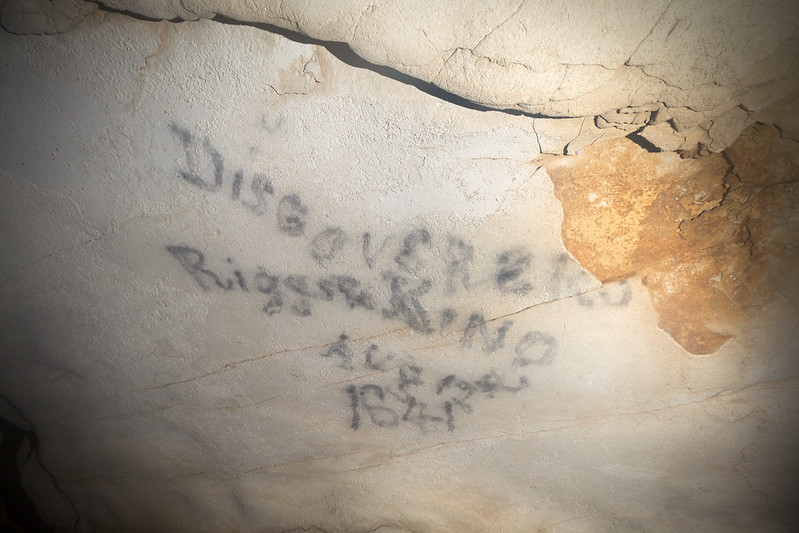 It being on the ceiling lends itself to being made from a candle. Also, when you've seen a lot of candle signatures you can just tell by the way it is (I am teasing and I know that isn't terribly helpful!). Here's what I see: candle doesn't lend itself to accuracy. Soot accrues on one side of the line, or the center of the line and wafts back and forth as does the breeze within the cave. It's a wide swath of carbon that it lays down, and tends to work best when used on a ceiling.

Mammoth Cave has been thoroughly explored since well before the alleged date of 1844, and is rife with historic signatures. Early cave owners allowed and encouraged people to leave signatures of their names. Vandalism - modern signatures being left in the cave are much less common and result in criminal charges when people are caught. So the likelihood that this is a modern fake seems unlikely. I'm sure a tour guide would notice someone holding a candle to the ceiling, right?

There are other methods one could pursue to authenticate a signature like this. Who were the people? Were they known? Are there records external which show them in the area? Given that I am less of a historian, and more of a geographer, I'll leave the case where it lies: almost certainly 100% authentic. 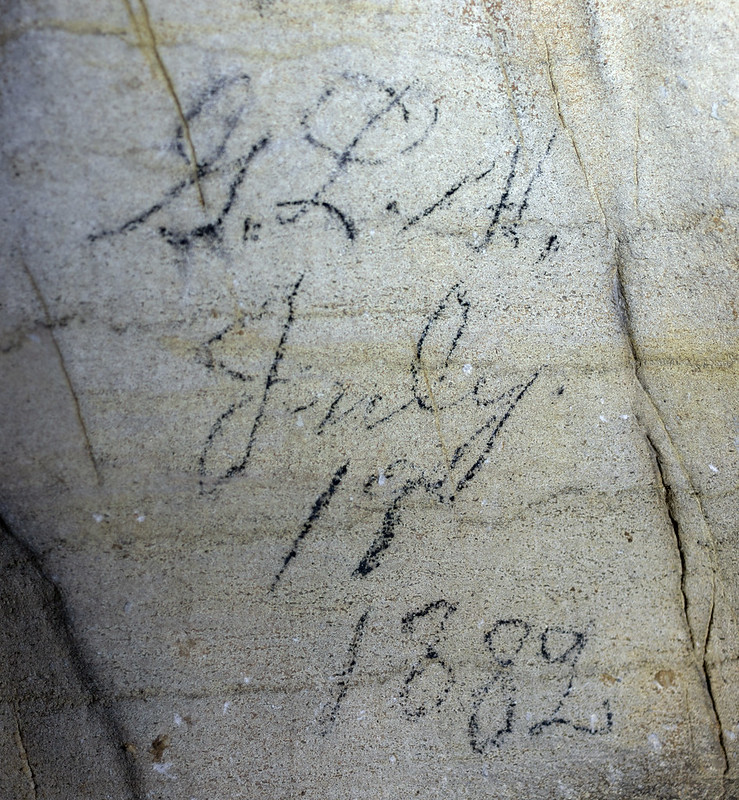 This cave was a well known local saltpeter cave which produced for the War of 1812 and the American Civil War. A date of 1882 seems consistent with its well known status and perhaps indicative of ongoing saltpeter mining or recreational use. The darker, thinner line drawn on the wall is consistent with the dark sticky line left by pine charcoal, which is also historically consistent with the alleged date. Also a great candidate for a 100% true historic signature. 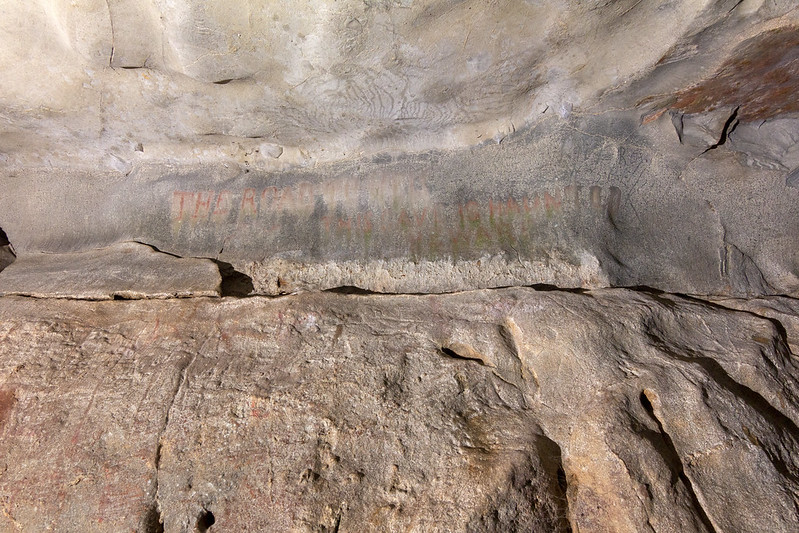 Note how strongly the text has faded. The medium for this feels like it could be a water based paint, or something similar. The medium itself suggests something more modern, perhaps in the last 50 - 60 years. The style of print, blocky letters of consistent size and shape is consistent with what I was taught in the 80s as proper print. While this method of writing has been around for a while, it grew in popularity for common use in the modern era. The message also is one that maybe calls to this space's use as a haunted house, a modern attraction. Perhaps teenage boys were trying to scare their dates, but the wiring in the cave also suggests a former landowner's interest in developing the resource into something more. All these signs - converging evidence point towards a modern origin.

This is a little more interesting. Red ochre, a basic pigment has been used since times prehistoric over much of the world. Obviously since this is script and in English, we can rule out it being prehistoric, but the medium is certainly not that common, especially in modern use. This would point us towards the historic. The script is also flowery enough to believe it to be historic. Its superposition relative to the painted JA shows us that it's older than whatever JA was painted on with. This is very likely historic. 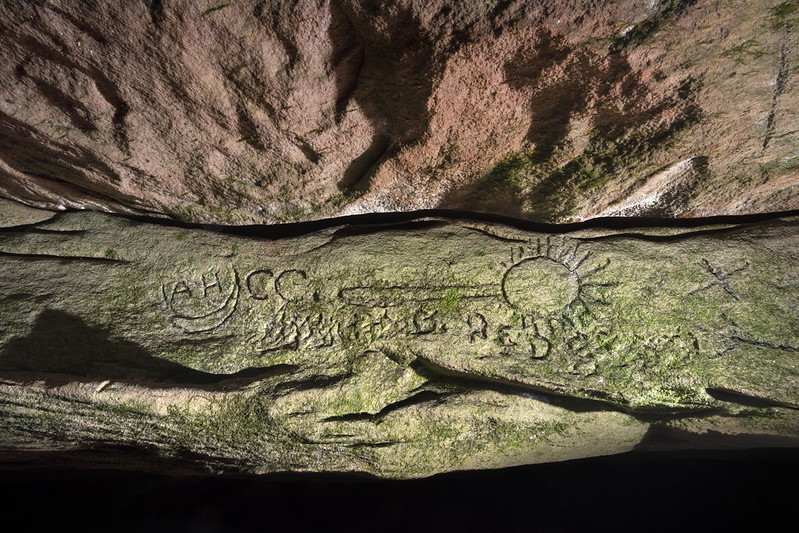 What's really going on here? This is where things get a little fuzzy. The sun and moon look to be prehistoric. They are both common motifs of regional prehistoric petroglyphs. The sun appears to be attached to a handle - perhaps the original artist, or an intervening artist intended to repurpose it as a weapon - a mace of the sun. I can only speculate.

Within and next to the art are modern etches of English letters. We can be certain that at least that much is historic to modern. There appear to be two pairs of initials that have been crossed out, which makes me think there was a couple there who carved their names in the rock. Again, only speculation. But them having been crossed out is significant - it would have been someone local who would have repeatedly visited the site. This is near civilization, so even in times historic this could have been possible, as it is still. 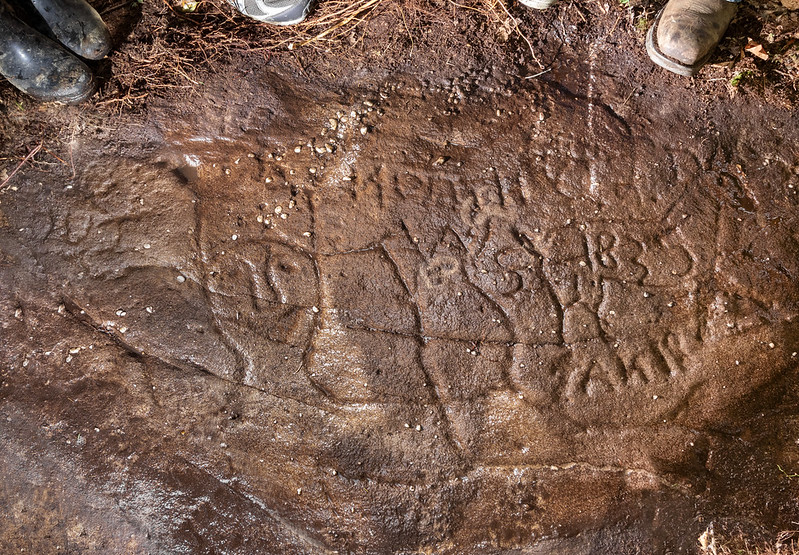 Style: Print and art
Medium: Etch, petroglyph
Context: Ground at overgrown overlook. Trees blocked the view, and a thick layer of moss was peeled back to expose the petroglyph.
Text: OUT / NORTH / W / 1835 / TAKIR?

This one is a lot of fun, and surely all signs point towards historic. The donkey, the smiling face, that all this was found at an overgrown former-overlook near to several historic roads really provides solid converging evidence to its authenticity as a historic piece. 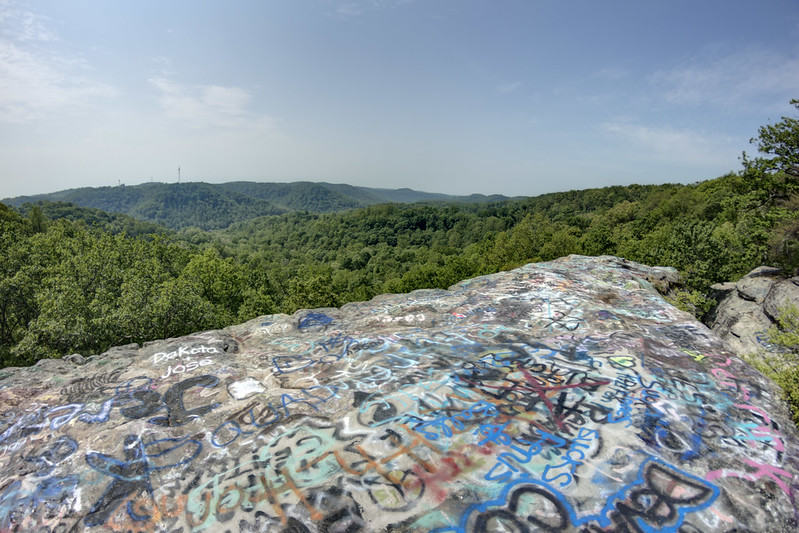 I throw in this obviously modern case of abuse to also highlight that these "conversations" people are having with the rock likely go to historic times. It may go back to prehistoric times. Don't cover things with spray paint, you're destroying your own cultural heritage. 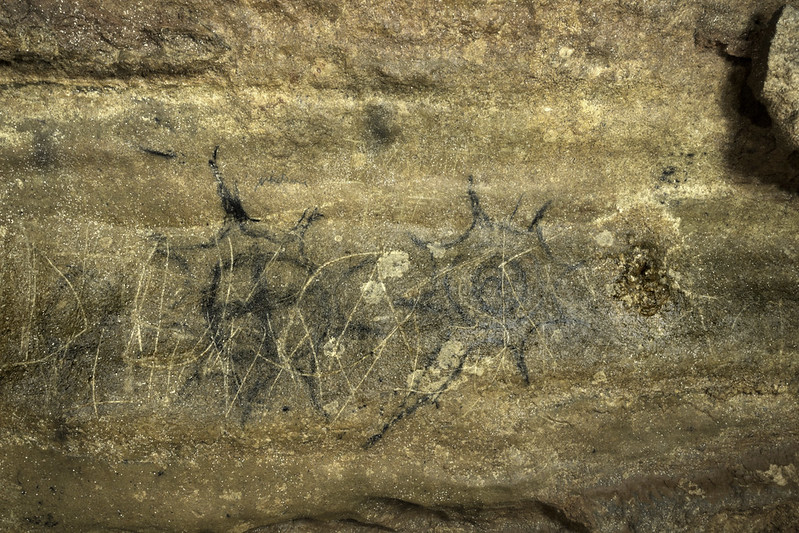 This is an obvious example of prehistoric art. Note the dark medium and note the etchings that are above it, which shows that it predates the etches. That's right, someone thought their name was more important than very rare Native American art from this period. The depictions, the medium, the location within the cave, and the superposition relative to etches all point directly to prehistoric.

This is by no means exhaustive, but should begin to provide some background on identifying historic and prehistoric markings. As a final word, I want to point out that pharmacists are exceptionally good at reading terrible handwriting and can be very useful for discerning hidden text.